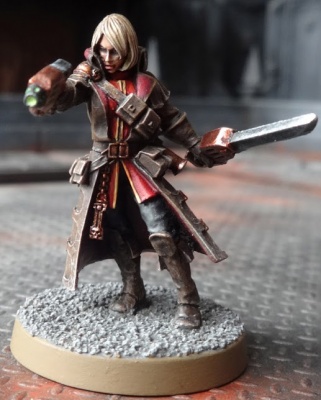 Ashar Lear is a psychic null graduate of the Schola Progenium who transfered into Inquisitorial service under Inquisitor Kovach She served as his Interrogator until his death. She then transferred to Inquisitor Drake until she was promoted to Inquisitor.

“That kid? Gave me the creeps. Best thing we ever did, getting rid of her.” - Cole Lear, Ash’s father

Ashar Lear was born in the countryside of Tarno, Salamut IX. Her parents raised livestock, principally cattle. She is the third of their seven children.

Life on the farm was mud, animal dung and an endless round of jobs and chores. Ash and her siblings were expected to pull their weight as soon as they could walk. What little downtime they had was spent running around the fields, and trying to avoid their father.

Cole Lear was a hard, impatient man. He was always quick to use his fists or belt on the children - and his wife Jenn - and it was a situation they accepted as normal. Ash, however, was a special case. With hindsight she thinks he may have been a very low-level psyker, because her very existence seemed to rub at his nerves like sandpaper. Where the others might get a cuff round the ear for perceived disobedience, Ash would get a blow hard enough to give her a nosebleed or concussion. A task could be performed identically by Ash and one of her siblings, but somehow she’d have done it wrong. The rules always changed, and after a while she realised that the rules were just excuses, anyway. She was her father's punching bag.

One year, cattle started to go missing across Tarno. They would be stolen in the night and reappear in fields miles away, torn apart. Strange patterns were drawn on the grass in their blood. The Inquisition were called in. The party of four came to the Lear farm, as they had been victims of two such thefts.

Inquisitor Sarko had with him a very powerful psyker - as soon as she saw Ash, she knew exactly what she was. Where others saw a skinny nine-year-old with a black eye and broken arm, Sarko saw a weapon. He made note of her and, when he had found the cult behind the disappearance of the cows, he returned to remove her from her parents.

Her father was happy to let her go. Her mother didn’t say a word. Of her siblings, she’d always been closest to her oldest brother - he gave her a rough hug and wished her well. Ash hasn’t heard from any of them since she left, and has never tried to make contact.

Ash was placed in the Schola, and Inquisitor Sarko informed her that he expected her to become someone worthy of being an Agent of the Inquisition. Since the hero-worship of the man and organisation who had rescued her had started the minute he took her by the arm, Ash dove into the Schola’s curriculum and studied as hard as she could.

Her entire previous education had been one hour a day of home-schooling from her mother, most of which she had managed to avoid. As a result, her literacy levels were shockingly low when she started, and it took a great deal of catching up to achieve even a basic grasp of reading, writing and arithmetic.

Non-academic classes, on the other hand, she excelled in. She showed a great proficiency with weapons, was a natural at hand-to-hand combat, memorised battle tactics, and was frequently chosen as squad leader in the Schola’s wargames. The other students were told she was a tool of the Emperor, and that no matter how they felt, they had to include her. Ash’s unbridled enthusiasm for people won most of her classmates over, and since she was usually on the winning team, she was often picked first.

The Schola could be a hard place. Religious holidays were barely celebrated. Birthdays were ignored. Corporal punishment was the norm. Training accidents were common. There were no days off, and the only affection came from other students. But Ash loved it, because it wasn’t Cole Lear’s farm.

When Ash graduated from the Schola aged 18, she joined Sarko's team of agents in the Achernar sector. His team were kind and welcoming to her, but after just 11 months Sarko was killed in action. In his will, he asked his old friend Inquisitor Kovach to take her on - so armed with the power sword he had left her, she set off for Sejanus.

Initially she was viewed as a competent agent, though substantially lacking in nuance and experience:

“Since joining the Emperor’s service as an agent of the Inquisition, Ash has shown several qualities which make her an admirable agent. She is true in her faith, strong in a fight, and carries out her missions without question. Whether or not she has the qualities to become - as is her dream - an Inquisitor herself, remains to be seen.” - Inquisitor Kovach in his public file on Ash

First, I should reiterate my thanks for your willingness to pool our personnel. Agent Lear most probably saved my life during our time in the Samalut system, and it cost her an arm. This makes it even harder to write this, but you asked for unedited truth.

Martially and psychologically she is exemplary. As a warrior I cannot fault her - indeed, she is at the least my equal - and she is dauntless in the face of even heretic Astartes. I cannot claim to be so fearless. Her simplicity of outlook is her greatest asset, but it is also the downfall of her prospects; I fear her dreams of a rosette may never be realised so long as she retains the rigid lessons of the Scholam. One might think her suited to the torch-wielding work of a puritanical witch hunter, and yet being a null means she lacks the charisma for such a duty.

As an agent she is superb. As an Inquisitor she would, I believe, do more harm than good. It pains me to say so, for I am fond of her, wish her every success, and hope to work with her more in the future.

As she matured, Ash managed to change minds. Kovach promoted her to Interrogator, and on his death she moved to Drake's team. And after the success of Mission Improbable, to her own immense surprise, Drake promoted her to the rank of Inquisitor at the age of twenty-eight.

As far as she can tell from the records, she is the first pariah to ever reach that rank.

We don't know each other, but since we're expected to police our own, I feel professionally obligated to express my surprise that you:

1. Promoted your interrogator after only six months.

2. Promoted her despite the fact that she is a pariah.

To the first point one might raise an eyebrow but say nothing. There are some rare individuals who have achieved the same.

To the second point, I must ask if you have taken leave of your senses. How a pariah could be expected to perform the subtle duties of our calling with both hands tied behind her back is a mystery to me. Perfectly decent Imperial servants will have a natural inclination to disobey her. Over time, such rancour could even compromise the Ordos' ability to prosecute our duty in the region.

I have not petitioned Lord Inquisitor Habermann on the matter but you may expect, given the increasingly difficult circumstances in the Cetus sub, that myself and several of my colleagues are following your movements with rather more interest of late, particularly since you have yet to hand your captive over to the Kapran Inquisitors. You have enough going on in Cetus, and we have a great many highly experienced interrogators willing to lift this load from your shoulders.

Implicit threats are always a source of entertainment, but the demands on my time are such that I prefer transparency. As such, you will note I have CCd the Lord Inquisitor, who approved Ashar's promotion to Interrogator under the late Inquisitor Kovach - something you would know had you performed a cursory spot of research first.

Your message implies that you neither researched how long Inquisitor Lear served as an agent, nor established the reasons for her promotion, merely that she is a pariah.

Since you saw fit to question the promotion of a woman who was just followed into battle by over 30 loyal individuals to face down multiple squads of heretic Astartes, and in a region you were tasked with protecting no less, I find it impossible to avoid the suspicion that envy played a role in your missive.

There is no doubt that Inquisitor Lear has much to learn about her new job, much as we did if the lengths of our respective apprenticeships are any measure.

As the majority of Inquisitors in the Kapran sub declared me to be the foremost expert in heretic Astartes, I will continue to interrogate the asset until I have nothing more to learn from it.

When I have actionable intelligence, it will of course be sent without delay. None of us want to see a second Hasmides.

Perhaps, if both of us focus on our jobs, it can be avoided.

Ash favours portable but highly powerful weaponry, despite the inherent risks. She continues to use a plasma pistol despite having her previous pistol suffer a cascade failure resulting in a heat discharge that destroyed her left (dominant) arm. In melee she uses a power sword. Her left arm has been replaced by a bionic, after the aforementioned plasma pistol overheat when in combat with Heretic Astartes on Samalut IX. Her right leg was replaced by a bionic after her original was obliterated by a Dark Eldar disintegrator during Drugs in the Prospekts.

Generally she wears an expensive and well-tailored flak coat and formal attire as befits an agent of the Holy Ordos of the Inquisition. Since The Missing Astropath she has also been equipped with an aura-suppression collar she can use to eliminate the anti-psychic field she naturally projects as a psychic null.

Whilst she was a Senior Agent and later Interrogator, Ash has adopted a matriarchal role with the newer agents to join Kovach's team, guiding and instructing them, and as such Max has dubbed her "Battle Mum".