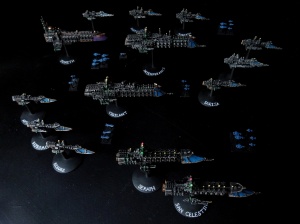 The Achernar Sector's battlefleet is a modest affair, with only a few squadrons of cruisers and a single battlecruiser. It is considerably better stocked with escort vessels and a few light cruisers, as befits a fleet whose main duty is pirate hunting. Another full squadron of three cruisers are extremely close to completion at the Kapran Shipyards of the Aureole. Admiral Tryphosa runs the fleet from the Aureole rather than from a ship, since her main task is coordinating patrol groups. Vice Admiral Laius Ortano is the fleet's field commander, responsible for commanding the fleet in most major naval engagements.

Vessels marked with a * served in the Second Battle of Xephone, and therefore tend to have more experienced crews.

Most battlefleets are led by a Lord Admiral, although the small size of Battlefleet Achernar means that it is commanded by a lone Admiral: Vitalia Tryphosa. Theoretically she should have two vice admirals serving under her, although since the fleet is almost never deployed en masse, she instead tends to assign post-captains the temporary rank of commodore for the duration of an assignment. In the event of her unexpected demise, Vice Admiral Laius Ortano would assume command of the fleet.

Below are the ranks of Battlefleet Achernar, given in descending order.

Commissions must either be bought, or awarded by another commissioned officer. As such most officers tend to be of noble origin and hold a dim view of those able souls promoted from the ranks.