Da Ork Airforce is a warband of Blood Axe Orks commanded by “Da Generalissimork”. He suffers from severe repeated hallucinations of the “Two Worlds War, when all da oomies wot there woz woz fighting each uvver and it woz ded brillyunt”. Dedicated to this ideal of total war, rather than leading his own Waaagh, Da Generalissimork leads a mercenary band who fight for any Warboss who will take them from their spaceship aircraft carrier the HMS Ork Royal. Occasionally they get carried away and lead raids of their own.

Da Ork Airforce operates from an escort sized spaceship, the HMS Ork Royal, that they prefer to land upon whatever planet they operate from. The top surface is largely occupied with runways and landing strips for aircraft, with large lifts ferrying vehicles to and from the hangers buried within. This forward operating base is heavily defended by smasha guns and traktor kannons, which double as both defensive weaponry and a system to safely land and recover damaged aircraft.

Unlike most other klans, where leadership is detirmined by size and power, and an Ork is in charge of anyone he can bully into following him and takes orders from anyone who can bully him, the Blood Axes often have a more regimented structure aping the military organisation of other races such as humans. In Da Ork Airforce, ranks and promotions are assigned by senior officers, because Da Generalissimork says so and well beat up any ork who disagrees. 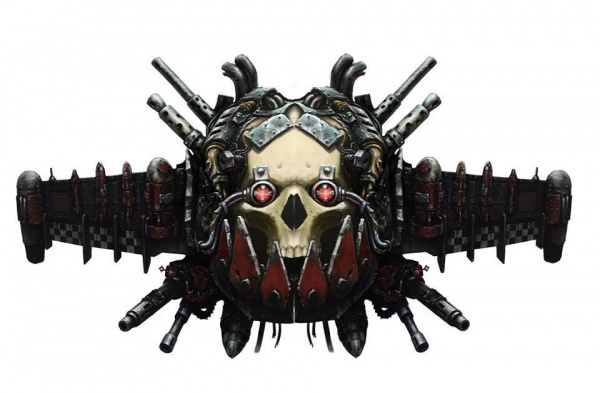 Any Orks joining Da Ork Airforce start out in Da Guard, theoretically tasked with base defence. Nevertheless all Orks love a good fight and whenever they can Da Gaurd will head out to join in the fray.

Once they have proved themselves in Da Guard, Orks may be promoted into Da Paras. Deployed directly from Warkoptas, ‘Eavy Bommers and Landas, these Orks leap directly into the fray using cloth parachutes to slow their descent just enough to survive the fall. The later they leave the opening of the parachute, the quicker the Paras get into the battle, meaning quite a few Paras misjudge the timing and impact the ground and terminal velocity. If they happen to land directly upon enemy forces this is generally considered a good way to go.

Paras that have proven their ability to generally not smash into the ground at high speed may be selected to join the jet-pack wearing Stormboyz.

As an alternative to the Stormboyz, the most kunnin’ and sneaky Paras may be invited to join the Kommandoes. You can’t blitzdakka an enemy if you can’t find them, and the Kommandoes are the advanced recon element of Da Ork Airforce. They also can be sent on missions to sneak in and destroy air-defences or other enemy installations that might cause problems. 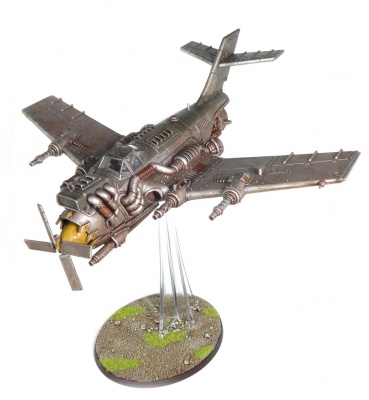 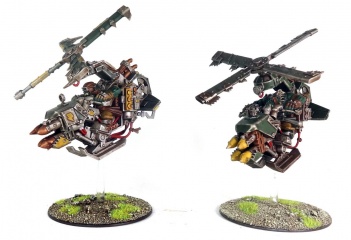 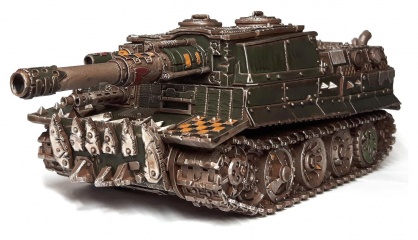 Even though Da Ork Airforce is a particularly well organised and disciplined group of Orks (not entirely surprising for Blood Axes), they are still an inherently chaotic and random race, and plenty of units end up in the warband with no specific place in the Heirorky. 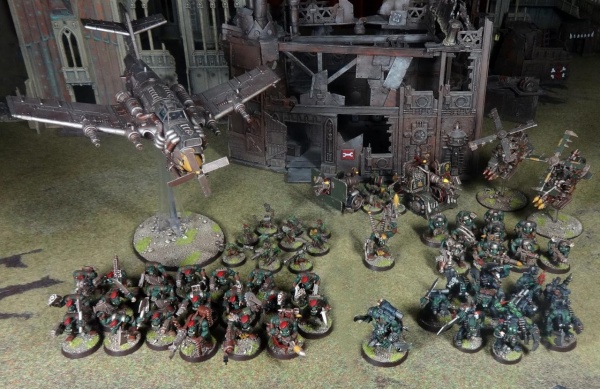 Guluk da Git progressed from Guard to Para to Kommando, where he proved himself to be particularly kunnin’ but brutal. Da Generalissimork promoted him to Warboss of his own group, and since then he has not disappointed. Clever for an Ork, he directs the combined forces of Da Ork Airforce with a sneaky and malicious mind.

Dhakadak likes building aircraft, but does not trust pilots. When he can, he deploys near to the engagement zone with field portable machinery capable of catching any aircraft that might be about to crash. As such, Flyboyz tend to avoid his position wherever possible in case he gets overprotective and interferes with their fun.

Skarzot finds nothing so satisfying as the little start people make make when you surprise them. It’s a tiny motion, not some loud performative scream of terror, just a little jump when someone hears something they didn’t think they would hear, but before they realise how doomed they are. The rest of Da Ork Airforce find it endlessly annoying, and send him and his Kommandoes out as much as possible to do it on the enemy instead.

Zagblag leads a mob of Paras that deploy from Da Orkules, a large troop carrying aircraft. He tends to get carried away and often forgets to gather up all his boys before charging towards the nearest enemy.

Kroggler is a grumpy old Ork, big and tough but not really trusted to be in charge of any kunnin operations. He doesn’t like being in charge of a mob of Guard but having failed to deploy his parachute on too many occasions has had proven himself a) incapable of advancing through Da Paras into a more elite unit and b) tough as hell for having survived so many falls.

Nakboz loves explosions and blowing up tanks. To the point where the Meks no longer trust him to be around the vehicles they’re making. Whilst technically part of Da Guard, Nakboz and his Tankbusters are deployed whenever there is any excuse that might get him away from the mek workshops in the heart of HMS Ork Royal.