Inquisitor Gregory Michael is an Inquisitor and member of the Ordo Xenos. Formerly a Colonel in the Imperial Guard, Michael retains a somewhat apolitical approach and concerns himself more with clear external threats to the Imperium and its citizens than internal politics.

Gregory Michael was born the fifth son of the planetary governor of Thoratis, in the Segmentum Pacificus. With several elder brothers all doing well, and no particular need for him, when he came of age he was given a good commission into the 5th Thoratis Regiment of the Imperial Guard and pretty much packed off to live out his life in an honourable enough position so as to not embarrass his family. His last communication with them was at least 20 years ago subjectively.

At the age of 40 Michael had achieved a modest rank of Colonel, his progress through the ranks slow but steady since he was a capable commander but not particularly interested in politicking and working to advance his career at the expense of others. He had an intense dislike of infighting amongst the factions of the Iperial Guard and wider Imperium.

He attracted the attention of Inquisitor Kovach during a Campaign briefing the Inquisitor happened to attend when Micheal made a suggestion that was smart, somewhat self sacrificial and, whilst polite, presented in a manner that was somewhat embarrassing to the Lord General. Kovach, presumably fearing the waste of a good servant of the Imperium to petty political revenge, took Micheal with him and inducted him as an Agent into the Ordo Hereticus. Seeing the way the Inquisitor was able to overrule the infighting and get everyone working together for the common good, Michael was glad to accept.

As an Agent of the Inquisition in the under-staffed Cetus Sub-sector, Micheal quickly gained a range of experience. Early feedback from Kovach, such as how he wasn't actually in the wrong to order a planetary governor to prepare to destroy a facility of psykers with nuclear weapons but it perhaps could have been phrased better, was well received. Michael quickly began to learn the other side of the political coin, how to handle people he had authority over, rather than constantly wrangling superiors.

Another formative experience was the capture of a Xenos of the Craftworld Eldar, during an encounter with Dark Eldar. He personally handled much of the interrogation of the prisoner, learnign kuch of the Eldar lore and later personally made a deal with the Eldar to remove a webway gate from an Imperial world in exchange for the safe return of the prisoner and several soul stones. This behavious was an early indicator to Kovach that Michael might be Inquisitor material.

A lack of expertise in xenos within the Cetus sub-sector led Michael to appeal to Kovach for more training, and Michael was dispatched to Hydraphur to receive further education at the Inquisitorial fortress Caerostrum. He met various Inquisitorial Acolytes there, as well as a few Inquisitors and one Space Marine, and navigated some tricky socio-political situations. Upon his return he was granted the rank of Interrogator.

Michael's service as an Interrogator was relatively short lived. Having come somewhat late to the job Michael already had a lot of experience under his belt, and Kovach held him there just long enough to be reassured that Michael had developed the political shrewdness to be an Inquisitor. Michael demonstrated this in several delicate political missions, firstly dealing with heretical youngest son of Lord Sejanus, then with the careful handling of the brewing political unrest on Erydimae.

Upon being granted the rank of an Inquisitor, Michael has declared himself as a member of Ordo Xenos, becoming the only Ordo Xenos Inquisitor in the Cetus sub-sector. After his experience on Erydimae, his first order of business was to prepare a small team to head into the Halo Zone and begin construction of an information network. During his time there he stumbled onto one end of a conspiracy that led to The Erydimae Incursion, and met Leonzio Fuente.

Upon his return, leaving Tiberius Kempon to run his information network, he redoubled his recruiting efforts for skilled acolytes and started plans for creating his own safe-houses. Since then he has been involved in various missions based in Cetus and beyond and build up a warband of acolytes.

Coming from the Imperial Guard, Michael is most comfortable in his trusty Guard-issue carapace armour. In deference to his team-mate's request that he try to blend in a little more, he sourced a second set that he painted matt-black and removed any trace of Imperial insignia. Whilst it wasn't quite as subtle as Ash and Jaxx had hoped, it has worked well and combined with his build, demeanour and armament, most people assume he is a high-grade mercenary or bodyguard.

He usually carries a bolt pistol and an ornate power sword, an heirloom from his family. The bolt pistol he was given by a tech priest when he was a Captain and his platoon relieved and then defended a manufactorium. The manufactorium was producing suspension pistons for chimera pattern tanks; the bolt pistol was the tech priest’s personal weapon. The tech priest knew that Michael, as a soldier, would put it to greater use in defence of the manufactorium than he could. Michael likes the analogy, it reflects his unwavering belief in the various factions of the Imperium working together for the greater good of the whole.

As he advanced in rank, it became apparent that he would sometimes need to give off an appearance more fitting to a person of his authority. Uncomfortable with the idea of simply wearing formal robes of office, he requested Ash's help in designing and requisitioning some bespoke armour suitable for an Inquisitor so that he might give the desired impression without sacrificing his personal protection.

Whilst previously disdainful of the force fields used by Imperial Guard Officers, considering them to attract far more fire by singling them out as important than they could ever deflect, he has now adopted one. Whilst he still does not favour their use in battle, he has come to accept that as an Inquisitor there are times when his identity (or at least authority) must be known, in which case the added protection is worthwhile.

In the wake of Drukhari In The Prospekts he has also acquired a selection of Dark Matter Weaponry for study.

During Never saw the Eversor Michael came into possession of a modified Falchion class frigate that he has named the Accipiter. 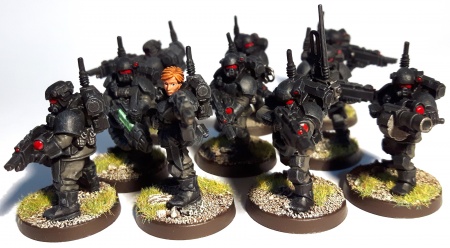 Like most Inquisitors, Michael has a warband of loyal acolytes and followers:

He also has a few members of his warband who do not normally take to the field with him:

Taking the field when military strength is required, Michael has a permanent detachment of troops from his old regiment:

A few written communications Michael has had: