From Cetus
(Redirected from Rosa Richter)
Jump to: navigation, search 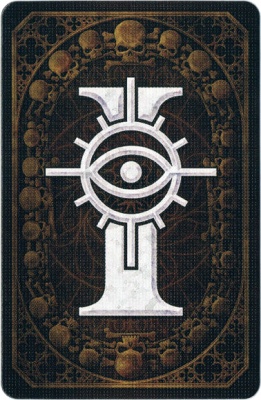 A trained psyker of the Adeptus Astra Telepathica, Rosa was selected by Inquisitor Kovach to be inducted to the Inquisition as an Agent based in the Obelisk. She was striking in appearance, tall with blue hair.

Rosa was possessed by the demon Iqshalla'rakshanoresh during The Rosa Effect and later destroyed by Inquisitor Michael. The full arc of events is collected in Category: The Rosa Saga

Evelyne Alyse was born on the agri-world of Menkar to a family of respected farm labourers. Evelyen was youngest and only daughter of a family of six. Evelyen had a happy childhood. She spent most of her time trying to help her brothers (Michael, Albert, Wilhem, George & Frances) on the farm. She was a small but strong willed child. She was always trying to do what her brother could do despite being younger and smaller. She would get incredibly jealous if they left her out. They used to laugh calling her their 'little shadow' but they loved her dearly.

It was shortly after her 10th birthday during a trip to the city with her brother Albert that the first glimpse of her psyker abilities surfaced. Leaving Evelyne on her own Albert went off to court a local beauty by the name of Greta. Left to her own devises Evelyne got herself into a bit of trouble with a few of the local bullies and used her psyker abilities to escape. This drew the attention of Inquisitor Bernard Baade who had been investigating the growth of Xenos-import crops. After a bit of a chase Baade was able to capture Evelyne by applying a strong punch to the side of her head. Dazed, confused and unable to see her brother she was taken off Menkar to be evaluated.

After a rigorous and quite invasive testing process Evelyn was found wanting and it was deemed that her psyker abilities were not strong enough to merit any training. She was taken to the Black Ship to be sacrificed to the Emperor. Upon arrival to the ship and seeing what was about to happen Evelyne unleashed hell. Smiting those who tried to take her, escaping those who tried to capture her and eventually passing out. A swift reevaluation after the devastation caused meant that Evelyne was now to be sent to the Scholastica Psykana. Evelyne's mind was wiped. She was given a new identity of Rosamund Richter and sent to for training.

Rosamund has no memory of her life before the Scholastica. When she thinks back it's nothing but darkness. She however does have a recurring nightmares where a giant light tries to engulf her and slowly drains her life force.

The Alyse family to this day do not know the whereabouts of their daughter Evelyne. Albert was blamed and disowned from the family. His search for lost Evelyne continues.

Rosa from the age of 10 spent her time training and learning at the Scholastia Psykana on Hasmides. With no sense of who she was after her memory had been wiped Rosa struggled to make friends at the scholastia. She applied herself to her studies and was a skilled student particularly with a staff.

It was agreed by the Imperium that after Rosa's training she would be posted outside of Achenar for fear that she may be recognised within the Achenar sector. However due to a faulty servitor the message 'don't post in Achenar' was changed to 'post to Achenar.'

Rosa was selected by Inquisitor Kovach to be inducted to the Inquisition as an Agent based in the Obelisk.

Rosa is a recent recruit to the Inquisition. She is largely ignorant of the greater issues facing the Imperium or indeed anything outside of the Scholastica Psykana.

Completely out of her depth Rosa has found it difficult to get use to her new position and is trying to establish her place within her team.

Rosa has been assessed to have a Zelta psionic level.

Rosa specialises in evocation. She in particular has a talent for burning her foes with a electric charge of psionic energy (Smite). After concern for her fellow team mates she has also in secret been working on a protective dome.

Rosa typically carries the staff of office of an Adept of the Astra Telepathica.

Rosa met Iqshalla'rakshanoresh during The Missing Astropath. A demon who whispers in her ear, offering powers, and wishes to be her ally. Since then he has appeared to her a few times in moments when she was using her psychic powers, such as during The Malal Killings and Murder Most Foul. Just before The Lost World Rosa shared this with Max. Max tried to do some quick research in the Inquisitorial archives but read something he should not have and woke up on the floor with a headache.