The impressively named “2nd Company” of the Iron Tide is in fact a relatively small warband, significantly smaller than the 100 Astartes plus command staff and vehicles that a full strength Adeptus Astartes Company would boast. Whilst they lack significant numbers of Astartes, they make up for this by using a large number of disposable mortal soldiers they refer to as “Meat”.

Followers of pre-heresy Iron Warriors doctrine, they consider war to be a logistical endeavour of resource and supply, rather than cunning tactics and heroics. They spend munitions and lives in a careful and deliberate manner to purchase victory. They use human cultists and slaves as workers and warriors to dig trenches, crew artillery and die in droves as foot soldiers.

The current 2nd Company was formed upon the death of Captain Estarox, when his two Lieutenants vied to take control of the company. Kharaxiani was the more aggressive and powerful of the pair, and many in the warband supported him as such, however he was also corrupted, having begun to overtly worship Nurgle. Rannok, the other Lieutenant, held to the more common Iron Warriors belief that Chaos was a tool to be used, not a power worthy of worship.

Knowing he could not physically best Kharaxiani in personal combat, Rannok began gathering his allies and the company began to head towards civil war. Warsmith Semnex intervened. He gave command of the 2nd Company to Rannok, but split off more than half of the company’s units into a new company under command of Kharaxiani.

The 2nd Company is currently deployed to the Eridani sector, far from any possible conflict with Kharaxiani. There they have established a fortress-factory on a mineral-rich world of Sidiros, and from that base they launch raids to capture slaves and technology. Much of their manufactured output is sent back to Warsmith Semnex on Medrengard.

Leader of the 2nd Company. Rannok joined the Iron Warriors prior to the Horus Heresy, and has bitter memories of the treatment of the Legion by the Imperium. He disdains the worship of Chaos, but is willing to use it as a tool and a weapon where necessary. He is torn between pleasure with the efficiency of his current operations on Sidiros and a desire to engage in larger long term campaigns. He is also deeply frustrated with the amount of politics required to maintain his current position; although he seems to be unaware of how good at it he is.

Sullus has long been a comrade and rival of Rannok. Over the centuries of working together they have established a twisted codependency of dearest enemies. Sullus supported Rannok’s claim to the leadership of 2nd Company as it puts him one step closer to the Captaincy himself, however this has somewhat tied his credibility and future chances at leadership to Rannok’s success. Of course if Rannok should somehow be killed...

Rannok had expected Shon-tu to side with Kharaxiani during the split, and does not know what made the Sorcerer choose him instead. He does not trust him, but he is too valuable to turn away.

Lotros’ skills are invaluable, particularly after the loss of Bharrox, but the Warpsmith is overly obsessed by the binding and creation of Demon Engines, over and above their practical utility, rather than maintaining the wargear of 2nd Company and the manufacturae on Sidiros. Rannok is giving him pet projects to keep him interested whilst working hard to train up replacements.

Ummek was a surprising choice to lead Rannok’s old unit as he is a young Astartes, created mere centuries ago. A cynic might suggest that having someone so young commanding the prestigious 1st Squad will limit their ability to gain respect and build a powerbase that might rival that of Sullus or even Rannok. That said, if he were not competent enough to hold the position he would not have survived very long.

Vhegor is ambitious and hates Rannok with a passion, seeing Rannok as the reason he has not advanced further. However he largely agrees with Rannok’s approach to warfare and attitude towards Kharaxiani’s indulgence of Chaos.

Commander of the Iron Havocks, Illux has become obsessed with the application of the most potent man-portable firepower available. He is exacting in the extreme, and has whittled down his squad to only the most dedicated warriors who share his quest for perfection. The Sorcerer Shon-tu often teams up with Illux, a partnership Rannok is somewhat concerned about. 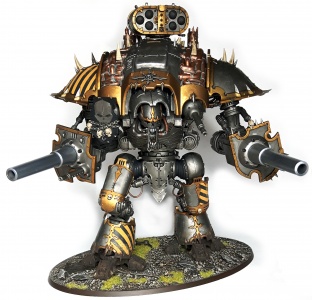 The most potent asset under Rannok’s command, the corrupted Knight Suit was captured intact and given over to the Warpsmith Bharrox. Rather than corrupting the pilot, or replacing him with another, Bharrox installed himself within the great machine. The loss of Bharrox as a viable Warpsmith was a steep price, but with it Rannok bought the loyalty of Bharrox and the power of a Knight. Bharrox’s new power under Rannok’s command, was a significant factor in the outcome of the brewing conflict between Rannok and Kharaxiani, and probably gained Rannok the captaincy of the 2nd Company.

Primarily configured for long range siege warfare, Bharrox provides extremely mobile and highly dangerous artillery support that is more than capable of defending itself from any sally force that gets close. 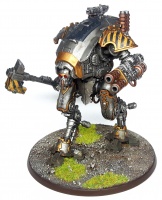 Alongside the Questoris class Knight, several Wardogs have been enslaved to Bharrox's command. 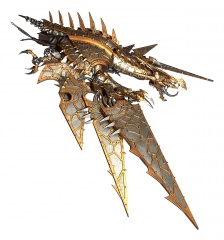 Whilst 2nd Company still refer to the Heldrake as Herdax, the Iron Warriors pilot who once bore that name is changed beyond all possible recognition. Once an ace fighter pilot who flew in the skies of Terra during the Siege, millenia of docking on the hull of cruisers and direct exposure to the warp has twisted Herdax and his craft into the fire-breathing Heldrake that now haunts the skies above the 2nd Company.

Playthings of Lotros, Hrendor and Metagor have been infected with the Obliterator techno-organic virus. Whilst they are extremely potent warriors and valuable assets, the 2nd Company has little respect for them and they are treated more as beasts than battle-brothers. 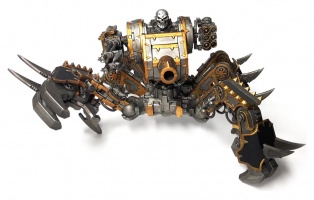 A creation of Lotros’ that Rannok never wanted and does not trust. Such indulgences are the price for Lotros’ continued support and his more valuable work on the manufacturae of Sidiros.

Long before the Horus Heresy, the Mechanicum was closely tied to the IVth Legion, and that has remained true ever since.

Rannok has been making an effort to get C’Mell involved with much of Lotros’ work so that C’Mell can pick up the slack as Lotros gets more and more distracted by his work with demon engines.

The Mechancum also actively assists in siege work, or “deconstruction”. E’keli applies his enhanced cerebellum and data gathering facilities to the accurate targeting of artillery and other heavy ordinance.

The mortal soldiers utilised by the 2nd Company are treated as disposable mutations rather than members of the Company. They have largely been lead to believe that their wargear is bare metal because it matches the heraldry of the Iron Warriors. In truth it is simply that it is not considered necessary to paint the mass produced and largely disposable wargear, most of which will be destroyed in its first deployment anyway. Indeed none of the meat are permitted to bear the Iron Skull on black iconography of the Iron Warriors.

Despite this general approach, there are a few of the meat who have lasted long enough and proved useful enough to gain some glimmer of respect. They are often marked out by their bionics, as most meat injured badly enough that they cannot work are slaughtered and added to the protein vats, but those who stand out enough may be considered worthy of repair and/or enhancement.

Houben commands the infantry portion of the meat. Whilst he reports directly to Captain Rannok, and within the Meat has rank equivalent to a Colonel, he is nevertheless subservient to even the lowest ranking Iron Warrior.

Falk commands the artillery. As with Commander Houben he has received cranial modifications to allow him to be integrated into the Iron Warriors tactical net to better receive his orders.

A pet project of the Iron Warriors Sorcerer Shon-tu, Arun Kerr is a psyker who was caught up in 2nd Company’s slave raids. A raw talent untouched by the Imperium’s soul binding, Shon-tu has moulded the nascent powers of the psyker into a tool. Crude and unrefined, he is more of a nexus of warp energy than an independent master of his own powers.