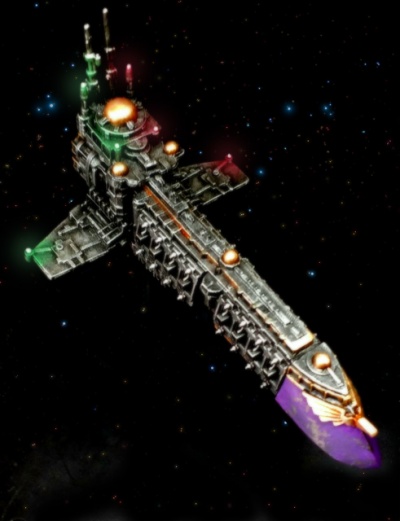 The Zenith is a capital-class trade vessel originally named Zenithal Venture by the shipwrights of Hydraphur. It has been owned by multiple trading dynasties since its construction in 893.M38 and has undergone numerous refits; at some point in time almost every component and bulkhead has been replaced. Its impressive batteries of macro-cannon are unusual for a civilian craft, and while not as effective as a true naval ship of the line, the Zenith is the implicit threat standing behind many successful trade deals. The ship has not been well-maintained, and while it may intimidate upon first impressions, there are some doubts as to how effective it would be in a real fight.

The dorsal half of the ship's stern, where the senior quarters, command deck and passenger cabins are situated, is tastefully decorated with wooden paneling and other such luxuries, as are the more refined establishments at the sternward end of the Spine (see ship layout section). The gold leaf on the dorsal domes is patchy, as is the regal purple of the Zenith's prow, but all the same the craft is regarded as having a certain gravitas. It is currently owned by Captain Hassiq Betancourt-Xing under license from Betancourt-Xing-Kerensky (BXK) Mercantile of the Konstig Sector, far to the galactic east of the Achernar sector.

The Zenith has a total crew compliment of approximately 5,000 (including servitors), and a passenger capacity of up to 340. Being staunchly pro-Imperial, the BXK Mercantile do not make use of xenos crew, and tolerate only the barest minimum of genetic deviance, a policy that Hassiq has maintained since inheriting the ship.

The Zenith sports sixteen macro-cannons. These are the ship's main armament, and each requires a crew of 130 to operate and maintain. The quality of the cannons and the limited ammunition stores mean that the Zenith is not the equal of a similarly-sized naval vessel. The guns are not well-maintained, and the crews are not well-drilled. Test firing is expensive, and the guns have not been fired for years. The gun crews keep themselves busy with mock drills, boxing, and less salubrious activities.

The ship's quad-linked autocannon turrets are used to fend off incoming ordnance. There are 32 turrets on the ship's hull, each with a crew of three: a gunner, a servitor-loader, and an auspex officer responsible for providing the the gunner with targeting information.

The ship's prow contains the main cargo hold, a series of shafts hundreds of metres high running from the top to the bottom of the ship. Bulk lifters land on plates in the dorsal landing bays, and are then lowered to the requisite deck to offload their cargo into warehouses crewed mostly by servitors. It can take a full day to fully unload the cargo bay using only the Zenith's lifters, although the process can be sped up by using local freight shuttles.

A series of shuttle bays run down the ship's spine. Like the prow dorsal landing bays, these landing pads can sink down into the depths of the ship, allowing shuttles to dock with the Zenith and resupply the many establishments on the Spine. The largest shuttle bay, beneath the command deck, houses the captain's cutter, and has enough spare space for visitors and passengers to dock their own vessels.

A broad promenade runs down the length of the ship, divided into sections (or 'Vertebrae') by heavy blast doors which slam shut in the event of an emergency. The promenade - referred to as the Spine - is a kilometres-long high street providing crew and passengers with shops, music, gambling, clubs, brothels, fight arenas, theatres, and so on. It is a veritable riot of styling as the previous owner of the vessel had a penchant for exotic locations and used to lure small time traders, artisans, chefs, and entertainers from worlds he visited so it is like a microcosm of the more fringe elements of the Konstig sector. Over time, class differences have naturally stratified the entertainments, so that low-class establishments are found toward the prow, and high-class establishments are generally closer to the stern. Passengers are generally advised not to visit the prow establishments, and the Zenith accepts no liability for those that do. There have been a few half-hearted attempts to clean things up, and so the individuality of establishments reduces the closer one gets to the stern of the vessel, is at its height in the central third, and then declines into decreptitude as one approaches the prow as there just isn't the trade/money for anything other than basic eateries, 'sec stills, and "cubicles of disrepute".

The Zenith has a range of passenger cabins ranging from luxurious to merely sumptuous, although sporadic power outages, surly staff and stiff bed linen, among other things, mean that the vessel is hardly well-regarded by discerning customers. These cabins are situated just aft of the macro-cannon batteries near the centre of the ship's mass, thus affording travelers unrivaled protection.

Being a civilian vessel that regularly transports paying customers, the Zenith's medicae facilities are relatively well-equipped to deal with illnesses and minor injuries, although they could struggle with combat triage. Hinata Hisakawa is the Chief Medicae, and manages 14 sick bays, 5 triage suites, and 5 operating theatres, most of them situated on the spinal promenade.

Keeping the crew fed requires a huge catering staff, most of which run private establishments on the Spine. Highly-regarded restaurants include La Culina and the Golden Grox.

The command and control crew operate on the deck immediately below the bridge, and co-ordinate the ship's functions and navigation. Much of the work is handled by Laverna's techpriests and over a hundred servitors, although some trusted staff are given access to this part of the ship.

Despite being one of the most obvious external features of the ship, the towering sensor suite installed by a previous owner is currently in an advanced state of disrepair. A number of focus lenses have cracked or degraded, and a large shipment of high-grate minerals are needed to repair them. Sadly, such materials are expensive, and the sensors - excellent for spotting spaceships at extreme range - haven't been seen as a top priority while travelling in Imperial space.

The Mechanicum crew are not as segregated on the Zenith as they would be on a military vessel, and fraternisation between low-ranking members of the priesthood and the rest of the crew is permitted, although cultural difference mean that there is a de facto barrier between the two societies.

The Ecclesiarchy demand that all licensed Imperial vessels have a spiritual presence on board. The Zenith does have a number of chapels on the Spine, and are largely left to their own devices by the management.

The Zenith has a company of mercenaries, and is largely reliant on the crew in the event of a boarding action. The mercenaries are of variable quality, although there are enough high-end soldiers that Major Foss is capable of deploying a team of twelve cutthroats to achieve... whatever it is one wants to achieve with a dozen unpleasant mercenaries in a gun cutter.

Major Damian Foss (ret) is an ex-guard officer with few qualms and fewer table manners. He seems to have a limited ability to form relationships with anyone, and doesn't necessarily value the lives of his men, but still commands respect by being both ruthless and lethal. The closest he gets to being friendly is being competitive, and if someone impresses him or beats him at anything, they get his respect. This means most of Foss' senior officers are like-minded, and have little sympathy or understanding for people who can't keep up with them. That said, they all understand their continued employment rests on maintaining at least a modicum of professionalism.