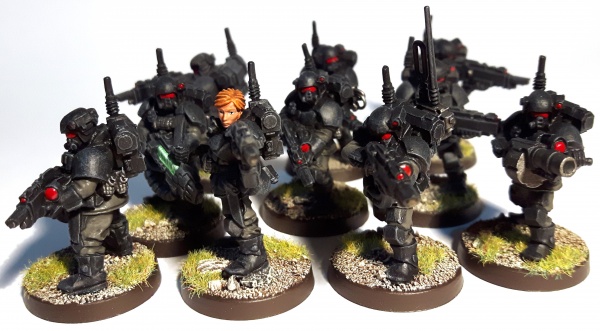 2nd and 3rd Squads of 1st Company, 5th Thoratis Regiment of the Imperial Guard have been seconded to Inquisitor Michael indefinitely for Inquisitorial service.

Upon ascension to the rank of Inquisitor, Michael requested some veteran troops from his old regiment; the 5th Thoratis. He wanted to have some troops he could be sure he could trust completely. Whilst the orders of an Inquisitor cannot be denied, no Regiment wants to lose any of it's best troops when they could get away with sending lesser men. However Michael's service with the regiment and the potential for patronage of an Inquisitor make a powerful twin incentive of friendship and political advancement. As such he was assigned 2nd and 3rd Squad of 1st Company, some of the best troops in the regiment.

Thoratis regiments, like many others, are armed and armoured in Cadian pattern equipment, and their veterans receive extra training and equipment to act as the regiment's Storm Troopers. 2nd Squad is equipped with Carapace armour and Hellguns. For Inquisitorial service Michael has ordered that their insignia be removed and their armour be painted black, much like his own. This gives them an intimidating yet anonymous appearance, but Michael has issued them with Inquisitorial credentials, in case they need to prove their authority. 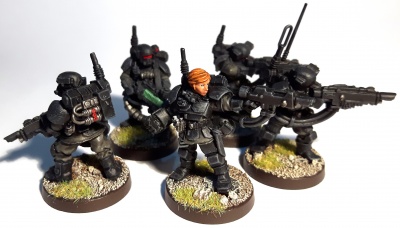 Michael's veterans consist of two Squads, slightly confusingly named 2nd and 3rd squad. They have opted to retain their designations, rather than reset their numeracy in order to retain their identity as part of the 5th Thoratis; which technically they are still part of, just on secondment. One squad short of a platoon, they have no officer of their own. When Michael is not in direct command, Sergeant Naomi Bila of 2nd Squad is the ranking NCO, ahead of Sergeant Titus Samson of 3rd Squad.

Thoratis is a civilised and fairly well rounded world, primarily agricultural but with some advanced manufacturing capability. The soil is, in general, somewhat more sandy than a typical Alpha-class world (is has been suggested that Thoratis was mostly covered in water before some unknown change during the Dark Age of Technology). A lot of hard work is required to keep nutrients in the soil, breeding a practical and hardworking but technologically savvy populace.