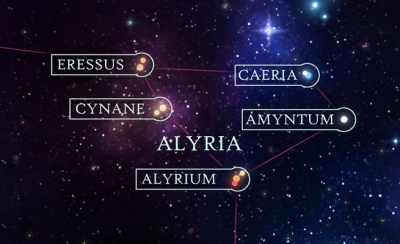 Alyria is a Sub-sector in the Eridani Sector. The five human-inhabited systems of the Alyrian sub-sector are, technically, Imperial. The other star systems (roughly sixty in total) contain few worlds suitable for human colonisation.

The Imperial colonies were isolated from each other prior to reunification during the Macharian Crusade, and retain a high degree of pre-Imperial culture. To outsiders, their cultures appear relatively similar, but each system is fiercely proud of its differences and Alyrian systems regularly settle even comparatively petty disputes over mining rights via the medium of armed conflict. Each colony has learned that the best way to keep the Imperium away is to pay lip service to the Cult Imperialis and to pay the tithe on time, thus enabling them to carry on with the wars they've been fighting on and off for millennia. The regular civil wars also ensure the troops are of a high quality, and so the Imperium turns a blind eye to the wars as they produce a resource the wider galaxy needs. That said, Imperial Guard commanders have learned to never deploy tithed regiments from two different Alyrian worlds next to each other if they want their focus to remain on the enemy.