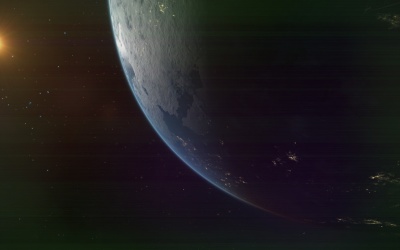 Ankrah Prime, commonly referred to as Ankrah, is an agri-world in the Handrothian Cluster of the Achernar Sector. It exports a variety of foods, textiles and promethium throughout the sector, and like many agri-worlds is sparsely populated by Imperial standards.

Lord Governor Mikaer Tane is the 17th generation of his family to rule Ankrah. He is known as an opportunist and an aggressive negotiator.

Marshal Jakar Anaru is the most senior field commander of Ankrah's PDF. He was sent by Governor Tane to personally oversee The Invasion of Boros' Folly.

Ankrans live in small, isolated communities which only occasionally come together in Adeptus export hubs. Tremendous value is therefore placed on self-sufficiency. Ankrans tend to be extremely outgoing and quick to make friends, since opportunities for social interaction with unfamiliar faces is a rare privilege, and the sharing of knowledge helps everyone hit Adeptus quotas.

Many communities have their own sub-varieties of Low Gothic, and their own naming conventions. Effectively, the once-homogenous colonists have re-diversified over the millennia both culturally and genetically, meaning that when Ankrans come together they often speak 'Common,' a local version of Low Gothic which all Ankrans learn in addition to their native dialect. This presents a challenge to Officio Prefectus and Arbites personnel when they first arrive, as it takes a while to tune one's ear to the cadence and slang-rich tones of Common.

Ankrah's level of technology is regarded has moderate to high by Imperial standards. A significant proportion of labour is carried out by servitors crewing semi autonomous agri-leviathans, with most of the colonists in a supervisory role. Some delicate and low-yield high-value crops are still grown in the traditional manner, however, and the labourers of such crops are held in high regard by other Ankrans.

Being a source of so much food and fuel makes Ankrah strategically vital to the sector. Its small population means it cannot sustain a large military, and given the broad open stretches of countryside, Ankran forces specialise in fast, mechanised warfare. Their combat doctrine revolves around hit and run tactics. Tank squadrons supported by mechanised infantry move into a position, lay down overlapping fields of fire, then redeploy when the enemy draws near. Infantry is used primarily to flush enemies out of dense terrain or buildings inaccessible to a formation's tanks. This style of warfare means that Ankran troops, while well equipped and trained, have very little heavy artillery and almost no staying power, and should be used only in the appropriate context to prevent unacceptable wastage of supplies and materiel.

A unit can be identified on the battlefield by its insignia: on the right side of the turret/shoulder pad is a coloured shape with a number on it. The colour of the shape determines the battalion, the number of sides to the shape determines the company (so a triangle = 3rd company) and the number indicates the squadron. The left side of the turret/shoulder pad displays the unit number within the squadron.

This regiment was founded in the wake of Macharius' crusade. The crusade took regiments from all over the Segmentum Pacificus, leaving it dangerously under-garrisoned. As a regiment raised to protect Imperial interests, the 107th has spent most of its history in or near the Achernar Sector, and has limited experience against xenos or heretic forces. Most recently, it was deployed during the orkoid invasion of the Samalut system and suffered significant losses, although the remaining units have been toughened by the experience.

Sgt. Chiamaka Davin leads team 4 of the 10 commando teams attached to the 107th. Her almost total lack of charisma is offset by her brutal efficiency. She has a reputation for insubordination, openly rebuking officers who issue foolish orders, and was only saved from a firing squad by the regimental commander, who argued that she was too valuable to execute. This has unfortunately deepened her arrogance, and if she knows she's one step away from summary execution, she doesn't show it. Her team, knowing that she'll fight against any order that would pointlessly throw their lives away, would follow her anywhere. This attitude has made her a long-time friend of Lieutenant Kahurangi. Famously, she never laughs. If she finds something amusing, she will normally nod once and say "that's funny."

The 3rd Company of the 6th Battalion, 2nd platoon

Adi Kahurangi, informally referred to by others in the 3rd company as "Bolt," much to the disapproval of the commissar, was the hot-headed lieutenant of the 2nd platoon when the 107th was deployed on Samalut IX. His propensity to run towards danger at the first opportunity earned him his nickname, and the moniker was cemented when Major Gerran gave Kahurangi his boltgun after the lieutenant saved the major's life during a skirmish in the Kidaaran Deadlands. This perceived favour irritated the other officers of the 3rd company, who felt that Kahurangi was a liability who had yet to understand an officer's duty to orchestrate, not to be so mired in personal combat that you cannot coordinate your forces. Naturally, the boltgun only increased Kahurangi's propensity for rashness.

Losses throughout the Samalut campaign resulted in Kahurangi rising through 3rd company's ranks by virtue of being the most senior person left alive, and Kahurangi was soon a major in command of the whole company. It didn't last. Following several unsuccessful engagements, regimental command felt he'd been promoted too early, and when new officers were brought in, he was demoted and put back in charge of his old platoon. These failures, and the loss of life, have damaged both his self esteem and his previously confident command style.

That said, a gleam almost always comes to his eye in a crisis. His track record makes others in the 6th battalion wary of him, but his willingness to listen to his officers' suggestions and his enthusiasm for safeguarding the Imperial populace make him popular with his men, who claim his failures were not his fault, but the fault of high command putting the company in impossible positions.

As an avid student of the Tactica Imperialis, Kusuma often finds herself at odds with Lt Kahurangi. He welcomes her objections, and often alters his plans in response to her input.

Kusuma is a demanding officer obsessed with tidiness and following protocol. Most people assume it's just in her nature, but those who've been in the washrooms with her note the lash scars on her back that suggest she didn't always have such a deep respect for the rules. Those who know her even better - namely, the other officers in the company - understand that she is terrified of failing to achieve the standard required of her, even though her performance is exemplary.

She is also fiercely competitive when playing barrelball, a rudimentary game played by many Ankran soldiers. The tendency for Ankran officers to involve themselves in this game is frowned upon by officers of noble birth from other regiments.

Lachlan, like many other political officers, was assigned to the 107th to try and curb the inappropriate bonhomie and enthusiasm of Ankran soldiers. A keen orator, Lachlan needs little excuse to recite passages from the Imperial Infantryman's Uplifting Primer and the Tactica Imperialis. The experienced soldiers of the 3rd company mostly ignore him and get on with their duty, smirking behind his back but careful to make sure they aren't caught in the act.

Vacca is a polymath who was begged by his tutors to keep his precious mind away from the battlefield, but he finds the quiet confines of academia less engaging than tending to a flock of tanks in combat. He thinks of No. 2 Squadron's tanks as his children, and their crews as unproven foster parents. The only problem with his chosen career is loneliness; the poorly-educated soldiers of the Guard make poor conversationalists, and he has precious few opportunities to talk to other scions of Mars. When he does, he hopes to find someone keen on intellectual stimulation rather than the mindless performance of prayers to the Omnissiah. He is a faithful man, but has no patience for those who are little more than servitors carrying out their daily routine. As such, he has a particular loathing for the propagandising epithets spouted by Commissar Lachlan.

The 1st Company of the 6th Battalion

As its name suggests, the Furiosa's machine spirit is a bellicose entity. Where many shadowswords are patient and predatory, the Furiosa revels in chaotic situations, dispatching smaller vehicles with glee and bringing charge to its capacitors readily.

Most Ankran regiments are armoured, and are essentially tank companies that incorporate their own support units of infantry and medium artillery. This system angers Departmento Munitorum officials, as it is dangerously close to giving commanders direct control of too self-sufficient a force, in contravention of the regulations preventing separatist commanders being able to prosecute a war effectively. This anger is diminished, however, by the logistical ease that arises from the extremely regular, standardised way in which most Ankran regiments are structured.

A regiment consists of 10 battalions, with colours assigned to each battalion in line with the legendary Adeptus Astartes battle companies.

Each battalion consists of 10 companies. The first company is a super-heavy company of 3 tanks. The other 9 companies each consist of 3 squadrons of 3 Leman Russ main battle tanks, supported by an equal number of mounted infantry squads, a command chimera, and support vehicles including self-propelled AA, medium artillery, and sentinels for scouting tougher terrain.