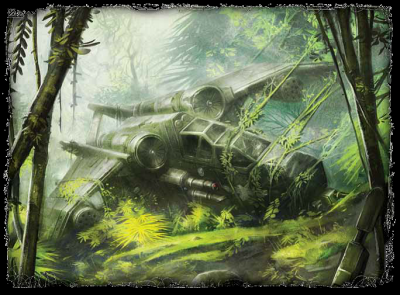 An Inquisitorial and Deathwatch mission to recover lost intelligence on Samalut IX.

I have a report that you petitioned the Deathwatch for deployment on Samalut IX. A rescue operation against Orks? I understood you were on a mission to check for Thousand Sons activity. I hope everything is well.

As an Inquisitor it is of course your right to petition the Deathwatch, regardless of Ordo, however I know a few cantankerous Inquisitors who are liable to make a fuss about an Ordo Hereticus Inquisitor deploying the Chamber Militant of the Ordo Xenos.

It might smooth some ruffled feathers if I were to put my seal upon the request, however retroactively. Although I hope you won’t think less of me if I ask you to let me know what the situation is before I blindly sign my name against something.

Hoping this finds you well,
Gregory

Your offer is one I will gladly accept. I have attached the full mission report, but here follows a brief and slightly more personal summary.

We dispatched Lt. Streddan on a reconnaissance sortie at high altitude over a site where we believed the Thousand Sons to be active.

Having gathered what I believed to be valuable intelligence, he was engaged and shot down by ork aircraft. I launched an immediate rescue mission in the Valkyries, but the orks reached the crash site with alarming efficiency. We committed to the rescue as Streddan sprinted towards us with a large warband of orks at his back. We were content to pick off the orks at range so that we could then go in and retrieve the hard drive of the shuttle's cogitator, but then ork aircraft converged on our location. Their level of coordination took me by surprise; Valkyrie 2 was downed, and Lt Cmdr Petersen and his men were set upon by orks as they evacuated the wreck. They held the xenos off until Streddan reached the harness dangling from Valkyrie 1, after which I reluctantly ordered a retreat, abandoning Petersen and his team. The orks' numbers were overwhelming, and all we would have achieved nothing by attempting to assist. I've never felt so hopeless.

The orks made off with most of the wreck, and retreated to a ruined Imperial town in the Ashapaal desert with the surviving dragoons as their prisoners.

I could have requisitioned a company of guard and gone after my agents and the hard drive, but as you know the Deathwatch are maintaining a small presence in the Samalut system, assassinating any leaders that emerge among the greenskins. I petitioned them for aid, reasoning that this was Inquisition business. As it happened, Elias was one of the marines in-system, and as you can probably imagine he was determined to help as soon as he heard his old shipmates were in trouble.

When I heard he was being accompanied by only two other Astartes I was worried.

I needn't have been.

They slaughtered every ork in the town in exchange for some badly damaged armour and some light injuries, from which their transhuman physiology appeared to recover almost immediately.

They did, however, make a disturbing discovery: the orks were being given guidance and assistance by a heretic brother of the Alpha Legion. That was why Streddan's aircraft had been intercepted so handily, and that was why they'd reached the crash sight so efficiently.

The deathwatch team led by Codicier Tymon Ausonius were in a vengeful mood, and so sadly the traitor marine was in the end far too dead to be interrogated. I suspect he may have questioned Lt Cmdr Petersen, but I haven't yet debriefed Petersen fully as he's still in the med bay.

It is with great regret that I must tell you five of the dragoons did not survive the incident: Jakobsen, Aldmarsdottir, Ingessen, Mjalssen, and Åsmundsen. Should anyone wish to attend the funeral, we're holding it aboard the Trojan in three days' time. These men and women followed me all the way from the Eastern Fringe, and I'm not sure what I did to deserve such loyal colleagues. Perhaps I should feel guilty for losing them, but it instead I feel rage at the heretic who precipitated this pointless loss of life. Should I find further evidence of Alpha Legion operatives in this region, I fear my zeal may eclipse my judgement.

Elias told me he almost wishes to return to my service to hunt for further heretic Astartes, but I think his time is better spent with your ordo. That only three Deathwatch marines are capable of emptying a town of xenos that my entire warband and two gunships could not defeat is at once horrifying and glorious.