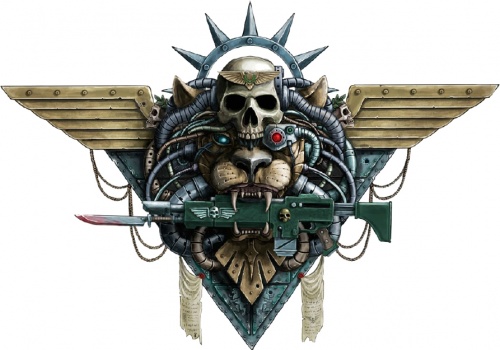 Seargant Dacius 'Sarge' Marle is an Imperial Guard veteran in the service to the Inquisition.

Dacius Marle was born on the Agri world of Iosmiri IV to a family of farm labourers. He was the youngest of three, his siblings being an eldest sister (Petra) and an older brother (Gaige). Due to the pressures of farm labour, Dacius’ attendance at the local schools became increasingly poor as he moved through adolescence. Instead, Dacius preferred to help his father on the farm. At the age of 22, Dacius was included in a recruitment drive into the Imperial Guard and (after attending basic training on-planet) was recruited into the Iosmiri XVIII Dragoons – a mechanised infantry regiment.

Service in the Imperial Guard

The XVIII Dragoons were initially shipped out to Henterai system in Charadon sector where they were engaged in a campaign to remove T’au from a number of captured Imperial worlds. This campaign was intended to take six months but dragged on for nearly two years and involved increasingly sporadic and fleeting contact with the enemy. During this time, Marle’s Platoon was involved in several engagements and Marle acquitted himself well, claiming five confirmed kills and rescuing his wounded Lieutenant from enemy fire during the siege of Clostaphore. Before the campaign had ended, Marle was promoted to the rank of Corporal.

During the rundown of the Henterai campaign, The XVIII Dragoons were co-opted into a task force to respond to the defence of Thraciun IP1 in the Acheron sector from the Orks of warboss Gurk Overdriva. Marle’s regiment were involved in the initial combat drops to secure the capital city of Highland Park. Marle’s dropship was hit by anti-air firepower and crashed deep behind enemy lines. The surviving troops set up a cordon around the dropship and survived three days of increasingly ferocious Ork attacks before being reinforced by the Gwalior 10th tank regiment. During this siege, Marle was wounded twice and was witnessed bringing an Ork down in close quarters combat by the section Commissar, for which he was later commended.

Marle convalesced for two months before being brought back into front line service in his platoon. On his second day of front-line service, Marle’s platoon came under attack from an Ork walker unit. During the day’s fight, Marle’s section was credited with destroying three smaller walkers with melta bombs and krak grenades.

After five years’ worth of fighting, the tactical worth of the now ruined and Ork infested world of Thraciun IP1 reached zero and the guard regiments began pulling off planet. The XVIII were to be the last regiment off planet – responsible for marshalling the retreat of the army and the evacuation of the remaining civilian population. During this period, the XVIIIth endured some of the hardest fighting of the campaign and suffered significant losses.

Marle’s platoon was one of the last off the planet and Marle himself (manning the section’s heavy bolter) was engaged in a firefight from loading ramp of the climbing dropship.

Three days later, Exterminatus was enacted on the planet. The barren and lifeless planet has since been repopulated under dome for the purposes of deep-core mineral excavation by the Ardex Mining Corporation. Following the withdrawal, the badly depleted XVIIIth Dragoons were disbanded and amalgamated into the Corinthian 12th regiment – The Hive-scorpions. The new regiment spent 6 months engaged in training on the nearby world of Khiri, where Marle – despite the differences in background – became a popular and trusted figure in the Corinthian 12th and achieved the rank of Sergeant. The regiment then spent a year in transit on their way to the Ultima Segmentum to fight against the remnants of hive fleet Behemoth and the main body of hive fleet Gorgon.

The Corinthian 12th were deployed to various warzones within the Ultima Segmentum to fight against various Tyranid forces. During this time, Marle was involved in various noteworthy battles including the siege of Erkin, the relief of Junsele and the massacre of the Bereznik plains.

Marle became the First Sergeant of his company and was generally found where the fighting was thickest. During this time, Marle’s exploits began to become known, and he claimed (and was supported with) several high value kills. Marle was also wounded several times and lost both a right hand and the lower part of his left leg. Both were replaced by bionics.

During this time, several commissars posted to the Corinthian 12th were involved in freak accidents. One was inspecting a basilisk’s gun when it unexpectedly fired, another was killed when his beard became entangled in his chainsword and a third died from self-inflicted crush wounds inflicted by their own power fist. As no witnesses were forthcoming, no further investigation occurred.

After 10 years of front-line service, Marle was recruited into the storm trooper platoon of the 12th Corinthian. This platoon of specialists was formed for the purposes of identifying and eliminating (either directly or through fire support) tyranid control organisms in the hives of Kostanay. The stormtrooper posting aided Marle’s reputation and tales were told of ambushes carried out on lictors, of tyranid warriors defeated at close quarters and of hand to hand fighting with terrifying creatures. The veracity of these rumours remained unknown, although Marle contributed to them with his physique, his record of bar fights and subsequent visits to the military police and floggings.

Marle was temporarily promoted to the rank of Lieutenant, although was demoted shortly after, following a fight in which he hospitalised a senior Munitorum official in a bar brawl.

After 4 years of exemplary service in the storm troopers, Marle was again pulled from most front-line duties and began training storm troopers and regular infantry in combat tactics and tactics for fighting Tyranids. It was during this time that Marle and his storm troopers engaged in training exercises with representatives of the Ultramarines chapter. This ended with an Ultramarine sergeant receiving a broken jaw and Marle having his arm broken in three places.

Fifteen years after deploying for the tyranid wars, the decision was taken to pull the Corinthian 12th out of the warzone for refit, resupply and reinforcement and they were withdrawn to the Segmentum Solar. Segeant Marle and a few selected commissioned officers from what remained of the defunct Iosmiri XVIII Dragoons were selected to begin a tour of the Achernar Sector for the purposes of propaganda and recruitment. Thus, it was that Marle ended up in Hive Sejanus.

Sergeant Marle came to the attention of the Inquisitorial retinue when Ashar Lear witnessed him in a bar brawl in club Astromonicon (sic). A severely intoxicated Sergeant Marle knocked out three bouncers, nine club goers, the night club owner and two members of the local constabulary before he was finally subdued and taken to the constabulary cells to face sentencing. Ashar, impressed by Marle’s fighting prowess, reported the night’s events to Inquisitor Kovach. The following morning, instead of receiving the customary kicking from the constabulary, Marle was astonished to find himself in front of an Inquisitor.

Kovach, made aware of Marle’s service record and in need of seasoned combat veterans offered Marle a place in his retinue. Marle, eager to avoid a re-posting to the tyrannic warzone and a kicking from the constabulary, agreed.

Marle’s life experience is largely limited to farming and fighting for the Imperial Guard and he has had a limited education. Although functionally literate, Marle has limited suitability for an investigative role and is retained for combat functions within the Inquisitorial retinue.

Marle (or Sarge as he has become known) is generally accepting of the chain of command and is taking an active role in ensuring that the more junior members of the team are trained in combat protocols. Following an early (and fairly chaotic) combat mission, Sarge is in the process of ensuring the entire squad is well versed in small squad combat tactics.

Sarge has an uncanny ability to obtain cigarettes and (much to Gaius Umberto’s annoyance) other people’s pens.

Sarge is generally truthful and in his own words (to Inquisitor Kovach) ‘will never lie to you about anything apart from Commissars, bar fights, how I came across alcohol, the welfare of people under my care and where your pen is’.

Due to his specialist nature, Marle is not always required on Inquisitorial missions and as such has significant down time. He spends much of this downtime by exploring Hive Sejanus and is gaining a fair feeling for the layout of the hive and sections of the underhive. He has also made contact with the local PDF and carries out occasional training exercises for them at Jurit’s Gap training base (150 miles South of Hive Sejanus).

For close quarters work, Sarge prefers either his service knife or a crowbar.