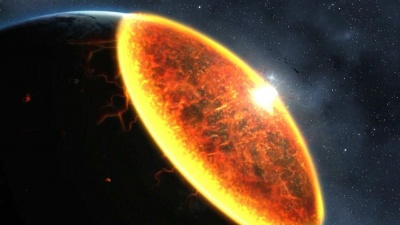 In the wake of The Lost World Inquisitor Michael sanctioned Exterminatus on Centra V.

I must solemnly request the fleet undertake action on behalf of the Inquisition in the Cetus Subsector, Centra system.  Your charts will be missing a planet, Centra V. I have attached precise coordinates and an update for your charts that includes the missing world.

The planet is currently interdicted by order of the Inquisition. I have a monitoring ship on station and it will be deploying beacons to warn ships away, however at your earliest convenience you will undertake to virus bomb the planet.

In fealty to the God-Emperor, our undying Lord, and by the grace of the Golden Throne, I declare Exterminatus upon the Imperial world of Centra V. I hereby sign the death warrant of an entire world. May Imperial Justice account in all balance. The Emperor Protects.

Thought for the day: Duty prevails.

Vice Admiral Ortano successfully delivered three cyclonic warheads to Centra V. Its biosphere is gone; nothing but rock remains. With no life left to tether it to our realm, the entity is gone.

Lord Inquisitor Habermann has been informed of this action, and a replacement stock of warheads will be delivered to Kaprun in due course. In the interim, we will have no means of delivering further such fates upon a world.

Would that the matter ended there.

When our flotilla arrived, another was already present: a carrier, three frigates and three destroyers, bearing a motley variety of colours. The carrier was a standard imperial class, but the escorts were of much older design of a type the Navy haven’t used in millennia. The carrier sat in high geostationary orbit.

It was directly above the entity.

The unidentified ships were on the far side of the planet as we approached. Ortano's flag, the carrier Intemperance, received a hail from the unidentified carrier. He declined it, suspecting them to be agents of the ruinous powers. His suspicions were confirmed when their escorts moved to engage us while the carrier remained in situ above the entity. The unidentified destroyers began broadcasting on most frequencies; a cacophony of suffering and lamentation performed, it seemed, for our benefit. I suspect they were torturing and executing captives, or perhaps each other. Perhaps it was just a recording, but I doubt it.

Ortano did not falter; the fleets exchanged long range salvoes as Ortano made all speed towards Centra V. The enemy lacked our weight of fire, but nonetheless their carrier sent waves of ordnance at us from the far side of the planet. A squadron of boarding vessels managed to get past our interceptors and boarded the light cruiser San Celestine, and what footage and testimony we got from the Navy Armsmen who fought them indicated these were devotees of the blood god, and particularly fanatical ones at that. They disabled the San Celestine's prow lances before the armsmen overwhelmed them. Twenty-nine navy personnel died in the firefight with many more injured, although I fear it would have been far worse had Captain Dorschel's men not been veterans of the Battle of Xephone. These men and women had faced ork boarding parties. The heretics fought like madmen and made no attempt to retreat back to their assault boats, which left without them.

Ortano closed with the planet, hoping to launch the warheads before the traitor carrier could finish whatever it was doing, but just as the Intemperance and San Celestine committed to their descent into low orbit, the unidentified carrier moved off. The Intemperance launched her warheads while the enemy’s escorts screened the carrier’s retreat. By the time our capital ships were in a position to come about and escape low orbit, the enemy was long gone, even if they had sacrificed all three of their destroyers to do so.

We have no idea what they were after, or what if anything they took. It is also the first time the Archenemy’s ships have been seen in the Cetan sub for centuries, although I daresay their interest lay primarily in the entity, not in our territory.

I will of course keep you informed of any further developments. For now, we have few clues and no means of finding the enemy. They may have left entirely, and while I dare not assume such a thing, I will at least allow myself the luxury of hoping for it.

Grim tidings indeed. Thank you for letting us know. Did the Vice Admiral report anything about the monitor ship I had dispatched to keep an eye on the system?

Mercifully the Garro evaded the heretics and awaited the arrival of our flotilla.

As I attended the scene aboard the Trojan, we formed a little squadron and did our best to contribute to the battle. Despite the danger to the ship I think Captain Janacek rather enjoyed herself, although to be honest we kept well back most of the time.

Personally I found the void combat deeply stressful, lacking any means to affect the situation but knowing we were one broadside away from abandoning ship. Honestly I think Ortano's job might be more stressful than ours.