From Cetus
(Redirected from Hive Sejanus)
Jump to: navigation, search

Located within the Achernar Sector, Cetus Major is the Cetus Sub-sector capital and the administrative centre of the region. Its primary habitable world is in the process of advancing from a Gamma-type civilised world to an Eta-type Hive world with the constant expansion of its largest city, "Hive" Sejanus. As a result of the thirst for raw materials for building and to improve the docking capacity for spacefaring vessels, the two airless moons are being heavily mined, militarised and undergoing geoplasty to become a pair of giant orbiting space docks. 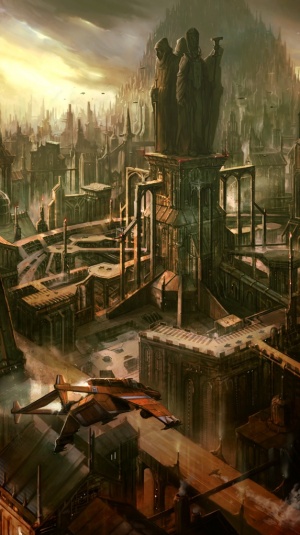 Hive Sejanus might be small in comparison to the largest Imperial hives, but it still has a population of over 200,000,000. In the broadest terms, it contains five strata: the spires, the hive, the underhive and the sump. Local slang uses different terms for these strata. Examples include 'the points' for the spires, 'uptown' for the hive, and 'the contrail' for the underhive. Addresses are given in three dimensions, so 'west contrail' implies the western end of the underhive, after which a street number or name would be given. Navigation within the hive is achieved on ten-lane roads known as 'underways' or 'decaways'. Travel between the spires is done in the air, and a constant swarm of grav-yachts, freight lifters, trade barges, luxury clippers and dhows illuminate the city sky with their running lights.

This monolithic basalt column is the Inquisition's headquarters in the Cetan sub. Its forbidding, oppressive exterior is at odds with the luxurious training and relaxation facilities within, although the holding cells and interrogation chambers in the uppermost levels are about as charming as one might expect. It was built in a bygone era when the Cetan sub had far more active Inquisitors, and as such most of its rooms lie empty.

The House Queln mansion sits atop one of Sejanus' spires, with its own landing pad and gardens. One of the oldest and most powerful families on Cetus Major, and indeed in the sub-sector, they have interests across the Achernar Sector. They own multiple trading vessels and run several large manufactorums within the hive. After his arrest Bastian Queln told the Inquisition many secrets about his family.

This upper-hive area is still open to the sky, but isn't central enough to count as the spires. It includes the areas known as San Borya, Wessam Heights, and the Pillars.

This precinct have a particularly favourable view of the Obelisk's agents following the Assault On Precinct 5.

This mid-hive district was the site where Bastian Queln spread his heretical pamphlets proclaiming counter-religious beliefs regarding the Emperor's unimpeachable health. The heresy was reported by Magistratum Officer Ensom.

Along with many others like it in District 57, this residential boulevard used to be open to the elements, although the sky has now been obscured by the next level of the city, creating a permanent night above the street lights; the only stars are the windows of the towering hab blocks. Most traffic occurs during shift rotations. Roving hawkers move their stands into the street in anticipation of feeding hungry commuters, and for an hour or so, they rake in credits before moving on in search of fresh business. Between these flurries of activity, however, the boulevard is relatively empty.

The Basilica of Saint Vesperia

The basilica is a grand old building, far down, near the lawless realm of the underhive. Eateries and shops selling devotional wares bearing Vesperia’s sigil are sold in Penitent’s Way and the Veiled Plaza. The plaza itself hasn’t been fully veiled in centuries due to the expense of maintaining the fabric needed, but one can still see the cables above with scraps of rotting fabric still clinging to them, serving as perches for dirty white doves. The Order of the Purple Shroud is attached to the basilica.

Also known as The Squeal or Meat City, this is the main slaughterhouse district of the hive.

A lower-hive area around a support column, a hub for local businesses and entertainment venues including Tenebrae.

This area of the underhive mainly features abandoned manufactorums that have been superseded by larger, newer versions closer to the hive's various docks. They are named after the noise they make - the electrical grid still sends power here, and occasionally the old machinery in the abandoned factories spontaneously judders into life as corroding circuits malfunction. One such manufactorum, a doll factory, was recently abandoned after the gang known as the Carrion Children were wiped out during an Inquisition operation led by Ashar Lear.

Also known as the Hive Roots or the Desolation, this is the very lowest level of the hive basements.

A small village on the opposite side of the planet to Hive Sejanus. It is an agri-community surrounded by citrus groves. The command crew of the Trojan, specifically Captain Janacek, have a tradition of taking a walk through the village whenever they return to the system as a way of "getting rock underfoot." The climate is warm and dry, as befits citrus trees. Its only mild claim to fame, other than being one of the oldest settlements on the planet (to the extent that it's pre-Imperial), is that Saint Theria once stayed in the village overnight during her proselytising work during the Compliance of Cetus Major. There is an inn named the Saint's Rest, that purports to have a lock of her hair sealed in glass above the mantle.