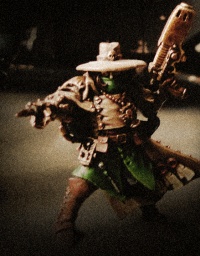 Inquisitor Drake
Inquisitor Eidan Drake is a member of the Ordo Hereticus, and as such is occupied primarily with internal policing rather than daemonic or alien threats to the Imperium. He specialises in political corruption, and whilst widely respected as a detective, Drake has attracted some controversy from other members of his order who argue that he is prone to supplanting Imperial representatives with individuals who lack the spine needed to make the hard decisions required of planetary governors.

Drake grew up on Sigma Pavonis, a world in the Ultima Segmentum with numerous servitor manufactorums. After completing his education with excellent grades and an utterly desolate social life, Drake enrolled with local law enforcement. With access to legal databases, he discovered an alarming correlation: if servitor production fell behind quota one month, the next month would see an increase in the number of court cases which ended in a sentence of mind-wipe for relatively minor crimes.

The correlation had been easy to spot; Drake inferred that such a widespread conspiracy would require members of government, the judiciary and law enforcement to be complicit. Rather than announcing his discovery, Drake kept his suspicions to himself for four years whilst he rose through the ranks and eventually transferred to a job in the planetary governor's staff. After becoming the personal assistant of the planetary governor herself, Drake finally had access to the information he needed.

He planned the release of his findings just as carefully as he'd conducted the investigation. Rather than try to involve local press (thus risking a clampdown by the corrupt authorities) Drake swallowed his fear and contacted the Inquisition. After presenting evidence of a planet-wide scandal implicating, among others, the governor, forty-three court judges, and several of his former colleagues in law enforcement, Drake's future in the Ordo Hereticus was assured.

No-one, not even the governor, knew who had betrayed them. One day, they were using their own population as an emergency meat bank; the next, an Inquisitor by the name of Aerdon had them arrested and sentenced to summary mind-wipe. So far as the people remaining in the governor's offices could tell, Drake simply disappeared one night and was never heard from again.

Drake was now in the employ of the famously intrepid (i.e. reckless) Inquisitor Aerdon of the Ordo Hereticus. Drake had two qualities Aerdon lacked: patience and subtlety, attributes that made him an excellent deep cover agent. Over time, Drake was given more responsibility, until he came to co-ordinate Aerdon’s intelligence network.

For all his achievements, though, Drake felt that he was forever in the shadow of Aerdon’s other acolyte, Benedikt Hirscht. Like Aerdon, Hirscht was more of a warrior than a detective. Once Drake had gathered all the information, pinpointed a target’s location and provided Aerdon with the enemy’s weak points, Hirscht would be dispatched to make the kill and enjoy the recognition.

Unsurprisingly to all who knew him, Aerdon eventually died in the field. His final act as an Imperial Inquisitor was to give Hirscht a field promotion so that he might have the authority to bring Aerdon's killers to justice. Hirscht had worked under Aerdon for only a fraction of the time Drake had done. Drake understood why Aerdon had made such a choice – they needed a war leader, not a spy – but the continued lack of recognition was becoming hard to stomach. That said, Drake knew better than to sour any professional relationships with his pride, and concealed his malcontent behind a famously dry sense of humour. As far as Hirscht ever knew, theirs remained a friendly rivalry.

It was years before Drake finally earned his Inquisitorial Rosette, and ironically, it was Inquisitor Hirscht that recommended him for promotion. Speaking to Sera Jentiva, one of his agents, Drake intimated that Hirscht couldn't even let him earn his rosette on his own terms. She rolled her eyes, made to slap him, and pointed out that he needed to put his days of being a "moody ninker" behind him. Drake later described the moment as being "thoroughly formative. Or rather, re-formative. That Sera knew me as a fellow agent before she knew me as her superior gives her something most people lack: the ability to tell me when I'm wrong. May the Emperor have mercy on any fool who tries to do this job without enjoying such honest counsel."

With his new rank, Drake had earned the freedom to leave Inquisitor Hirscht's retinue and pursue his own interests. For the first time in his life, he had no superior to report to. Hirscht sent him off with his team and Aerdon's old ship, a refitted destroyer named the Trojan.

Drake is a well-read man with a particular interest in pre-Heresy history. The more he sees of the Imperium, the more he believes it to be at odds with the Emperor's original vision. He had always assumed the horror of Sigma Pavonis' servitor manufactorums were an eccentricity of his homeworld; he now sees them as typical of a culture that has drifted leagues away from the Emperor's true intent. Every day, billions of Imperial soldiers lay down their lives to protect worlds run by selfish or cruel leaders. This is Drake's primary frustration: the Imperium should be adored, not endured. To this end, Drake has been known to depose and replace particularly cruel or corrupt politicians, even if they weren't directly undermining Imperial authority or military strength.

Some hardline Inquisitors of the Amalathian ethos have therefore claimed that Drake is becoming a Recongregationist: a radical school of thought that argues the Imperium has become corrupt, and that its institutions should be replaced with ones more in keeping with the Emperor's original plans. Whilst Drake certainly has some sympathies with the concept, he doesn't believe it would be possible to enact such seismic changes in reality. He would describe his actions as pruning rather than uprooting, but it doesn't stop some amongst his Ordo from claiming that he spends too much time undermining Imperial authority figures (as opposed to hunting individuals or groups that pose a real threat, such as rogue psykers, cults, and so on).

Furthermore, Drake is a man of empiricism more than a man of faith; notably, he has no priests in his retinue, something his detractors cite as clear evidence of his "radical" stance. Such accusations have drawn Drake into some very protracted - and very public - arguments with other Inquisitors.

More recently, during an operation in which Drake cooperated with the Monodominant Inquisitor Fallschmidt, the puritan's retinue travelled with Drake aboard the Trojan, during which time Fallschmidt's techpriest ally noted that the ship's Mechanicus adepts were not observing all the normal rites associated with maintaining the destroyer's holy machinery. Fallschmidt's techpriest wrote, "I believe my brothers aboard the Trojan have spent too long away from the priesthood. They greeted me with the sign of the cog, but in their workshops (which they seemed disinclined to show me) they had many allegedly-broken devices laid out on the benches. They claimed these devices - sanctified relics of the Omnissiah - were being repaired, but the tools I observed were those used to disassemble, not to piece together. For what reason would any right-thinking disciple of Mars pick apart an undamaged displacer field generator?"

Heresy on Cetus Major Drake's last project led him, over the course of almost five years, from one side of the galaxy to the other. During the return journey he received a hail via general Inquisitorial astropathic relay from Inquisitor Rosamund Carscallen requesting assistance with a matter on Cetus Major. Progress on that case is recorded in Drake's Log.

Having an intense distaste for the unpredictability and risk of armed combat, Drake is a relatively cautious leader, preferring stealth and careful preparation over head-on assaults. His tactics are heavily based on The Damocles Gulf: A Strategic Treatise by Cato Sicarius. In his book, Sicarius describes how the tactics of the alien Tau often entailed a stealthy approach, followed by a "mont'ka" - a decisive killing blow intended to strike the opponent with such overwhelming force that they had lost before they even had time to realise they were under attack.

In terms of personal fighting style, Drake tried a number of weapons and styles before settling on a lightweight power gauntlet and master-crafted plasma pistol, both lifted from Aerdon's personal collection. Besides the obvious benefit of leaving him relatively unencumbered whilst deploying an impressive amount of raw destructive power, Drake's loadout suits his style of single, carefully-placed shots as opposed to a 'spray and pray' mentality. The gauntlet itself, barely any bigger than Drake's actual hand, allows for a swift, loose form of boxing, and is often assumed by opponents to be nothing more than a flashy piece of armour right up until he hits someone with it.

For a long time, Drake's only field agent was Jentiva. That said, when violence is required to achieve his objectives, he made frequent use of the Trojan's marines: a half-company of Stohlbard Dragoons. Since settling in the Cetus sub, his retinue has expanded considerably.

Most of Drake's warband originally worked with him under Aerdon's employ, and include:

Drake also has ties with the Grey Knights, following his dealings with them during the closing years of the Amarinthine Crusade. They occasionally contact him when they suspect an Imperial official of daemonic corruption, knowing that Drake will conduct an undetectable investigation before reporting back to them, thus affording them the element of surprise if and when they have to launch an attack. They have, in the past, conducted joint operations where only a few Grey Knights have been available, knowing that Drake - having worked under Aerdon of the Ordo Malleus - has some experience in coping with the malefic.