Iosmiri is a binary star system on the trailing coreward edge of the Achernar Sector, and as such multiple ships pass through it on their way into the rest of the sector.

Iosmiri IV is an agri-world providing a large amount of food to the Achernar sector both through Imperial Tithe and through private trade.

For hundreds of years it had been an idyllic world, culturally harking back to the era of Victorian England on ancient Terra, with a strong class system and an affectation for the appearance of low technology amongst the elite (horse drawn hover-carriages and upper-class tea rooms). This was due to an Administratum oversight that allowed the planet to go un-assessed for over 300 years. As such the demands for efficiency and productivity were low.

In the wake of the Ork invasion and Chaotic incursions into Samalut IX, the Administratum began actively searching for replacement sources of food and rediscovered the potential of Iosmiri IV. An assessment was made and the Tithe doubled. In the wake of an Inquisitorial investigation many of the powerful Barons, and the Planetary Governor, have been arrested for illegally importing Xenos machinery to make up the shortfall in labour required to meet the tithe. Thousands of new immigrants are being imported from Pont DuRot instead.

With the social elite decimated, and the planetary population projected to nearly double with working class immigrants from a factory world, the planet is due for massive sociopolitical upheaval. 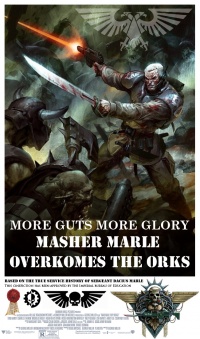 Sargeant Dacius Marle originally hailed from Iosmiri IV, where he joined the Imperial Guard. After a long and eventful service he returned to the Achenar Sector on a recruitment drive. In the wake of this, since he was a local-grown hero, authorities on Iosmiri IV created a series of films, in theory for entertainment but in reality primarily as a recruiting tool for the Planetary Defence Force and Imperial Guard. They are very loosely based on the character and service history of Sergeant Marle:

Posters typically feature a muscular hero in Imperial Guard uniform killing aliens with lasgun and combat knife whilst an attractive female Imperial Princess clings to his legs. The films’ budgets were mostly focused on impressive explosions and showing off the vehicles, weapons and equipment of the Imperial Guard, and the xenos foes are universally depicted as weak and cowardly. Critics have also pointed out that all the aliens appear to be quite obviously short humans in rubber prosthetics and facepaint and are in many ways highly inaccurate, such as T’au featuring too many fingers and human shoes instead of hooves.

A fourth instalment was also made but suppressed by the Inquisition: All Guts, No Glory: Masher Marle Hammers the Heretics.