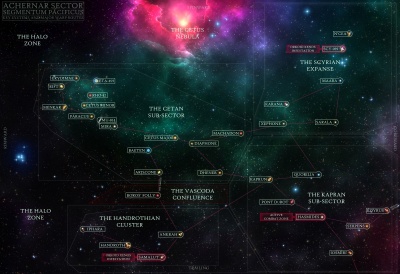 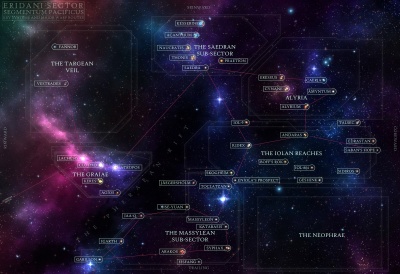 What is this wiki for?

This is a community wiki produced and maintained by and for the Beard Bunker bloggers as a setting for various games in the Warhammer 40,000 mythos. If you have stumbled upon it from farther afield, know that you are most welcome! We hope it might provide you with some ideas or inspiration for your own games.

The Achernar Sector as a whole is used as a backdrop for 40K, Battlefleet Gothic, Deathwatch and Inquisitor. Any new locations, factions and characters created for a game/campaign we play end up here, so the wiki grows over time. As such, the level of detail varies hugely.

The Cetus sub-sector in particular is designed as a setting for roleplay centered around the Inquisition; see the timeline and list of characters below. Indeed this is what gives the wiki its name, as the Obelisk is the Inquisition fortress on Cetus Major where most of our Inquisitors are based.

The Eridani Sector is an area that has been newly created (as of July 2020) as a region suitable for more extensive conflict. Many of the subsectors have been left deliberately vague so that various factions and planetary systems can be introduced without contradicting established canon.

Timeline of events in the Achernar and Eridani sectors.

For some simple guidance on editing pages, which are mostly plain text, see the How to and please feel free to add to it.

To learn more a good place to start is here: MediaWiki