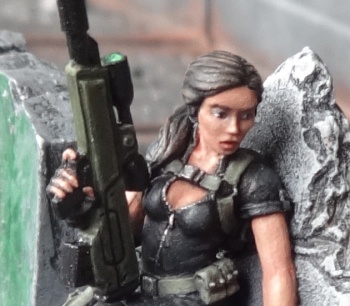 Life on the streets

Having visited family friends in the San Borya biome, Nadiya had passed the four Pillars on several occasions and knew the 4th to be both incomplete and deserted at the top. Having no clue about living rough, it was the one place she thought to hide. She begged and scraped enough money to buy a dilapidated water purifier, built herself some planters next to the broad, glassless windows, and collected rainwater and her own urine to pass through the purifier. She prefers not to discuss what she used for soil in the planters. She was occasionally harried by psychic phenomena, and fearing that she might be dangerous to others, tried to keep to herself. As a devotee of the Imperial Cult, however, she yearned to visit a shrine, and eventually made her way to the Shrine of San Marquand. While praying, her presence reacted to a place of such emotional significance, and the statue of San Marquand wailed as sibbilant voices filled the air. Terrified that San Marquand was judging her a traitor, she fled the scene. The priest, Brother Joras, witnessed the phenomena and had called the Magistratum. They attended the scene and attempted to apprehend Zelenko, who in her agitated state didn't realise she was subconsciously using her gift to escape: begging the officers to leave her alone and forget they ever saw her were surprisingly effective. She fled back to her hovel in Pillar 4 and feared she was losing her mind. A few days later, with the Magistratum having tipped off the Inquisition, Inquisitor Drake dispatched a team to apprehend her, just under six months after her disappearance.