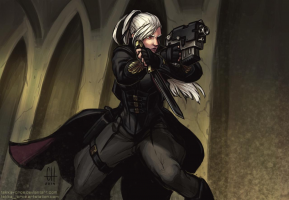 A mission to track down a rogue agent.

Bard Nobel was dispatched by Inquisitor Vandemar to track down an agent of the rogue Inquisitor Gelineau. He finally caught up with her in a nightclub in the lower reaches of Cetus-Major. She seems to know people working there and had not left since the club closed. Bard called in reinforcements to storm the club and catch the prey. The target was Agent Helmi Pedersen, an Acolyte of the rogue Inquisitor and Vandemar wants her alive.

Agent Pedersen was captured but she had been ready for an assault and resistance was fierce. There were armed criminals as well as three Ogryn workers. Corporal Aukalega was killed in the engagement and Bard Nobel was wounded.

+++TO: Inquisitor Bastian Vandemar
+++FROM: Inquisitor Gregory Michael
+++SUBJECT: Regarding your successful capture of a rogue agent
+++THOUGHT FOR THE DAY: To err is human; To err again is treachery.

We share a mutual acquaintance in the form of Inquisitor Eidan Drake. In the wake of your capture of Inquisitor Gelineau and the destruction of the heretical workings of Inquisitor Luque, he consulted me; and I believe fed the information I shared with him about the nature of the xenos machines back to yourself.

Most recently I understand one of your agents has been in Cetus on the trail of one of Gelineau’s assets. I am pleased that some of the Obelisk staff were able to assist you. To be clear, I have no interest in interfering with your case, or pressing issues of territory or jurisdiction. I appreciate policing our own is a vital part of the work we do but I have not the temperment or talents for it, but I am pleased to know that such an important case is in the hands of someone of your reputation.

That said, I am interested in your case, and the information you may uncover. Gelineau was Ordo Xenos and is known to have operated in this region on several occasions. I also have reason to believe she was working in the Halo zone adjacent to this sector, an area I have particular interests in myself. I have been reading the reports you have produced so far with great interest, but may I ask your intentions with this agent “Helmi Pedersen” that you have captured?