From Cetus
(Redirected from Samalut IX)
Jump to: navigation, search

Samalut is a star in the Handrothian Cluster of the Achernar Sector. The system's primary colony is Samalut IX, an agri world best known for the wines grown on the Dionysian subcontinent. Besides some listening stations, there are no other colonies of note in the Samalut system, as there are no other celestial bodies offering any resources of significance. 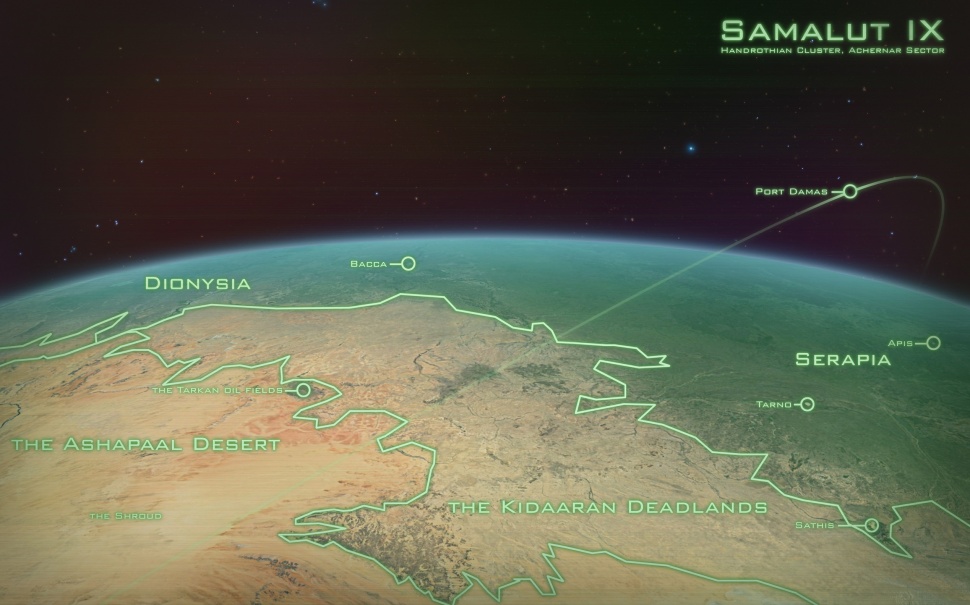 View of Samalut IX from high orbit, overlooking the northeastern hemisphere. The planetary capital Sathis is visible near the bottom right.

Timber, tropical fruit and pulses are the main products of the region around Apis. Like Salamut IX's other cities, Apis largely exists as an administrative hub to organise the planet's agricultural output. Cities are regarded as unpleasant places by Salamutians, who regard the grey-clad Administratum clerks with undisguised amusement. Apis is regarded by locals as being even more bland than the other cities, featuring a modest space port and token defences. Its civic buildings are monolithic and plain compared to classically gothic Imperial architecture, and everyone except the stylus-pushers try to spend as little time in the city as possible.

A noted tourist destination for the wealthy, Bacca is where the wines of Dionysia are brought to be lifted into orbit. Recognising the revenue potential of a pleasant city sitting amidst vast vinyards and fruit farms, Bacca remains picturesque despite the space port ten miles from the city. Bistros and wineries line its broad boulevards, and many nobles dream of building villas in the surrounding area.

Large enough to provide docking facilities for multiple bulk freighters, this is where Samalut IX's agricultural output is taken to be exported elsewhere in the Achernar Sector. Being a large and strategically vital facility, it is well armed with batteries of macro cannon, lance turrets, point defences and torpedo silos.

As the planetary capital, Sathis is also home to one of Salamut IX's largest space port, and co-ordinates the export of Salamut IX's vast agricultural output. As a strategically vital location it is heavily fortified against both surface and orbital assault, with overlapping void shields, orbital defence lasers, missile silos, and a squat ferrocrete curtain wall studded with gun emplacements and anti-aircraft defences, all of which leads to locals to refer to it as the Friendly City.

Efforts have been made in some parts of the city to decorate the curtain wall with murals and bands of vibrant colours, although many of these decorations end up being eroded by the strong winds that blow in from the Kidaaran Deadlands.

Sathis' markets are acknowledged as the best place to acquire off-world items, and rumour has it the city also has an extensive black market fuelled by trade cartels keen to add value to their grain runs.

There is another trade in the city: that of big game hunting. Venator Airfield takes nobles and hunters out into the Kidaaran Deadlands and the jungles of the eastern continent in search of large an exotic creatures ultimately destined for carnivoras, specialist eateries and trophy plaques across the sector.

The countryside surrounding Tarno is perfect for rearing grox herds and other livestock, most of which are slaughtered in local abattoirs, driven by road to Tarno's distribution centre, and then split into two streams: one for planetary and system-wide distribution, and the larger share being shipped to Sathis on the Artery, a railway that links Tarno to both Sathis and Apis.

Rolling hills covered in neat rows of vines typify the Dionysian landscape. Whilst some agri-corporations utilise mass production techniques to produce cheap wines, there are also a great many estates run by private land holders; part of the 'brand' of Dionysian wines is their unique, bespoke palettes, and this requires a more individualistic approach, even if some would say the differences lie primarily in the mind of the drinker.

Subterranean water and runoff from the mountains on the eastern side of the Kidaaran Deadlands irrigates a vast belt of relatively arable land in western Serapia, used primarily for rearing livestock and growing grain. Eastern Serapia is dominated by jungles, although they are currently being cleared faster than they regrow. With tithes increasing, lumber is starting to be farmed in manageable rows rather than pulled straight from the jungle, resulting in what locals refer to as 'gridwoods'. The jungles themselves are dangerous places, with various fauna presenting a serious danger to loggers.

Once the seat of a pre-Imperial human culture, desertification means the Ashapaal is now uninhabitable. There are twelve ruined towns and cities scattered throughout the Ashapaal, all of them gradually crumbling and sinking beneath the dunes. Each of them has, in the town square, a strange, articulating statue of a robed figure pointing in the direction of the Shroud bearing a caption which, if the translations are accurate, reads do not forget the sacrifices of your forefathers.

The deadlands are filled with mountains and deep canyons caused by violent tectonic activity millions of years ago. Some of the canyons are said to be so deep that they defy exploration, with some of them producing noxious gasses.Eastern Kidaara's mountains are sufficiently tall as to prevent rainclouds travelling further west, perpetuating the region's arid conditions. There are no Imperial settlements here, although it is rumoured some mutants and other fringe subcultures attempt to eke out a desolate, nomadic lifestyle away from the eyes of the Adeptus Administratum.

The epicentre of the Old Culture, the dunes of the Shroud have now buried the rumoured location of the ancient capital city. The area is completely uninhabitable to all but the fauna that have evolved for such conditions.

As with many worlds with abundant life, there are rich fuel deposits below the surface. The Tarkan oilfields are one such region - the richest in Samalut IX, in fact - and as such are covered with sprawling refineries and drilling rigs. Most of the fuel is taken straight into orbit to Port Damas, then exported from the system, generating a huge amount of revenue for Samalut.

Samalutian culture is quite puritanical, a trait perhaps encouraged by small, isolated populations of agri-workers with limited exposure to other cultures. Mutants are shunned by most, then given underpaid work in the industrial farms. This has in turn created a subculture of nomadic mutants living out in the Kidaaran deadlands, away from the oppressive views of the general population. The system generally meets its tithes, although this has resulted in the Adeptus Administratum determining that the tithes are too lax, and output is therefore perpetually required to increase, leading some to worry that the situation may become untenable in a few centuries. There is an idea that the relatively large wild areas of Samalut IX are part of what gives the planet its character, and a requirement to clear it away to make room for more fields would be to destroy the place's identity, and by extension its culture. Samalutians romanticise the idea of the independent land holder, and personal independence so long as one meets one's obligations to the Adeptus Terra. This faithfulness to the Adeptus is being challenged by the Administratum's approach.

Governor Singhe is popular; she prioritises worker health, believing that Salamut IX’s sparse population is crucial to feeding billions of people in neighbouring systems. She makes numerous public appearances, and works to further the reputation of those managers who are aligned to her goals while publicly shaming those who try to cut corners. This sometimes means Salamut IX very occasionally fails to meet quotas, and she is the one who has the argument with the Administratum that she must prioritise the wellbeing of her workforce to prevent greater problems further down the line.

During the invasion of the orkoid invasion of the system, Singhe was kidnapped and held for ransom by the orks, who were keen to be given a number of basilisk self-propelled artillery pieces. After almost a week in captivity she was located and rescued in a covert operation by the Raven Guard. Refusing to give herself time to recover from the ordeal, she was soon out in public encouraging the troops, allowing all to see the bruises and cuts on her face. Her defiance was thought to be one of the deciding factors in the Defence of Sathis.

A man who prefers to be the power behind the throne, Shikoba was uncomfortably thrust into the political limelight by the absence of Governor Singhe during her capture. Since Singhe's rescue he has, with great relief, gone back to working behind the scenes.

An officer known to care deeply - perhaps too deeply - for the troops under her command, the overseer of Samalut's planetary defence force had never been tested by a full planetary invasion until the arrival of Magbozz Urgrin Kanrippa. She coped primarily by imbibing stimulants in place of sleep, and some argued her judgement became foggy as a result. Her instincts lean toward caution, and that caution deepened as the invasion wore on, leading to a rift between her and the space marines who arrived to handle the crisis.

Atanasov remains calm under pressure and insists on at least 6 hours of undisturbed sleep per night, trusting his juniors to handle crises for long enough. He is privately frustrated with Nayeli and inclined toward proactivity, but also has less skill at anticipating his opponents.

Marshal Rehman was pushed to her limits by the recent orkoid invasion; greenskin 'Storm Kommandos' repeatedly disabled or hijacked the auspex relays she needed to guide her pilots, and the experience has left her with an appreciation of the need to defend one's ground assets more vigorously.

Rumoured to have carved out a subterranean empire in the canyons of the Kidaaran Deadlands, this ork seems to be emerging as the new warlord following Magbozz Urgrin Kanrippa's defeat in single combat by Captain Machiavi. His exact whereabouts are unknown.

This ork appears to be keeping the dream of the stealth-assault hybrid ork warband known as the 'Storm Kommandos' alive. Whilst he lacks Bozzgit Kawsmash's rokkit pack, he makes up for it with "Morky kunnin" and "ded sneaky boots." He is currently at large in the jungles of Serapia.
UPDATE: Assasniated during the Astartes mission Hunting the Stormkommandoes

Samalut IX is currently a war zone. Invaded first by small forces of Aeldari and Heretic Astartes engaging in inscrutable warfare out in the badlands, it has since been subject to a full scale invasion by Orks. The initial invasion was held back by a combined force of Blood Angels and Raven Guard until a full counter-invasion force of Imperial Guard could be deployed. Whilst the main Ork force was defeated, the planet is very much still an active warzone and the repercussions of such a productive agri-world only able to produce a fraction of it's usual output are being felt throughout the Achenar sector.