The Scyrian Expanse is a largely unexplored area of the Achernar Sector. Xephone serves as the sub-sector capital for the Adeptus Terra.

Until recently the Scyrian Expanse was entirely uncharted but for a colony founded only fifty years ago in the Xephone system. The Xephone colonists were constructing the materiel necessary to launch colonising and charting efforts further into the sector. The first explorator fleet was due to depart in thirty years' time, but recent events in the Xephone system have revealed that the Expanse was not as empty as was previously assumed. A flotilla containing the Intemperance and the rogue trader vessel Zenith were tasked with charting the region, which in turn resulted in several new outposts and colonies being founded, namely, the Maara and Sarala systems. Furthermore, a lost human colony in the Karana system was brought back to the Emperor's light. Unfortunately, several xenos infestations have been discovered, including the massive orkoid infestation in SCY-039 and the T'au of SCY-028. Much of the Expanse remains unexplored, with the potential for the founding of more colonies, and the discovery of more threats. 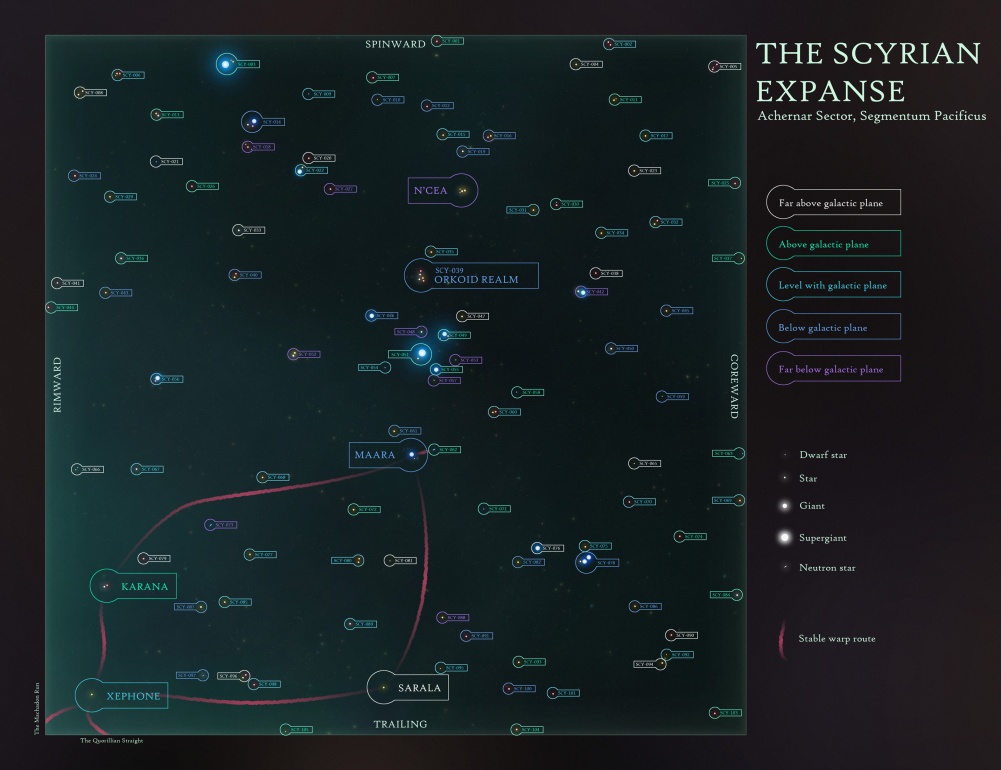 Star chart of the Expanse

There are 105 stars within the sub-sector, although it is expected that only a handful will have worlds of any strategic value.

Commodore Laius Ortano was tasked with charting the Expanse following the greenskin invasion of Xephone. While the San Celestine remained in the Xephone system to watch for more greenskin activity, the rogue trader Zenith was invited by Admiral Tryphosa to join Commodore Ortano's expedition so that trade links and negotiating expertise could compliment the navy's military might.

The expedition entered SCY-083 shortly after departure, and discovered that it was not only a non-Imperial human system known to the locals as Karana by the locals, but that it was in the midst of a civil war. Ortano and Betancourt-Xing came down on the side of the Commonwealth, and helped tip the scales against the Anshan Republic, subsequently signing a treaty and bringing the system into nominal Imperial Compliance.

From there the expedition delved further into the expanse, setting up the mining outposts Sarala and Maara, the former having been named in memory of Sarala Roshaan, the Intemperance's original master of ordnance.

Three further discoveries of strategic note were made during the initial charting effort.

First, a small Necron fleet was encountered. When their tomb complex was discovered, a confrontation took place from which the navy fleet emerged triumphant, although several Necron capital ships managed to escape.

Second, the quintinary system SCY-039 was found to be completely infested with greenskins. The orks had substantial naval assets and were in the process of preparing an armada. Harrying the orks was the revengeful Onduin, who mentioned that there was another xenos civilisation the orks might have their eye on further spinward into the Expanse. The navy retreated and continued exploring while making preparations for war.

The third discovery was the aforementioned spinward xenos civilization. It was, in point of fact, a T'au colony founded following an experimental FTL device that had catapulted the fleet most of the way across the galaxy, stranding them. They had established a colony in SCY-028, naming it N'Cea.

A treaty was brokered by Betancourt-Xing and the T'au leadership in which the two cultures would cooperate to face the ork armada, then leave each other completely alone thereafter.

The ork fleet was then faced by a joint Imperium, Aeldari and T'au fleet and secured a decisive victory.

The expedition was set to continue when news came that a splinter of the ork armada had left prior to the battle and had invaded Samalut, all the way over in the Handrothian Cluster. This development forced the end of the initial exploration and the return of the fleet to Imperial space.