The Goo, The Bad and The Ugly 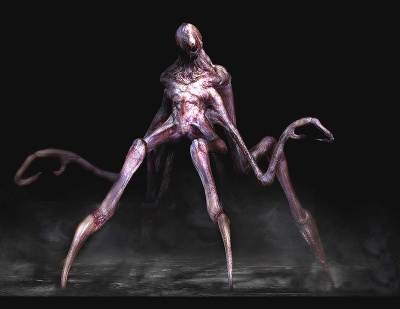 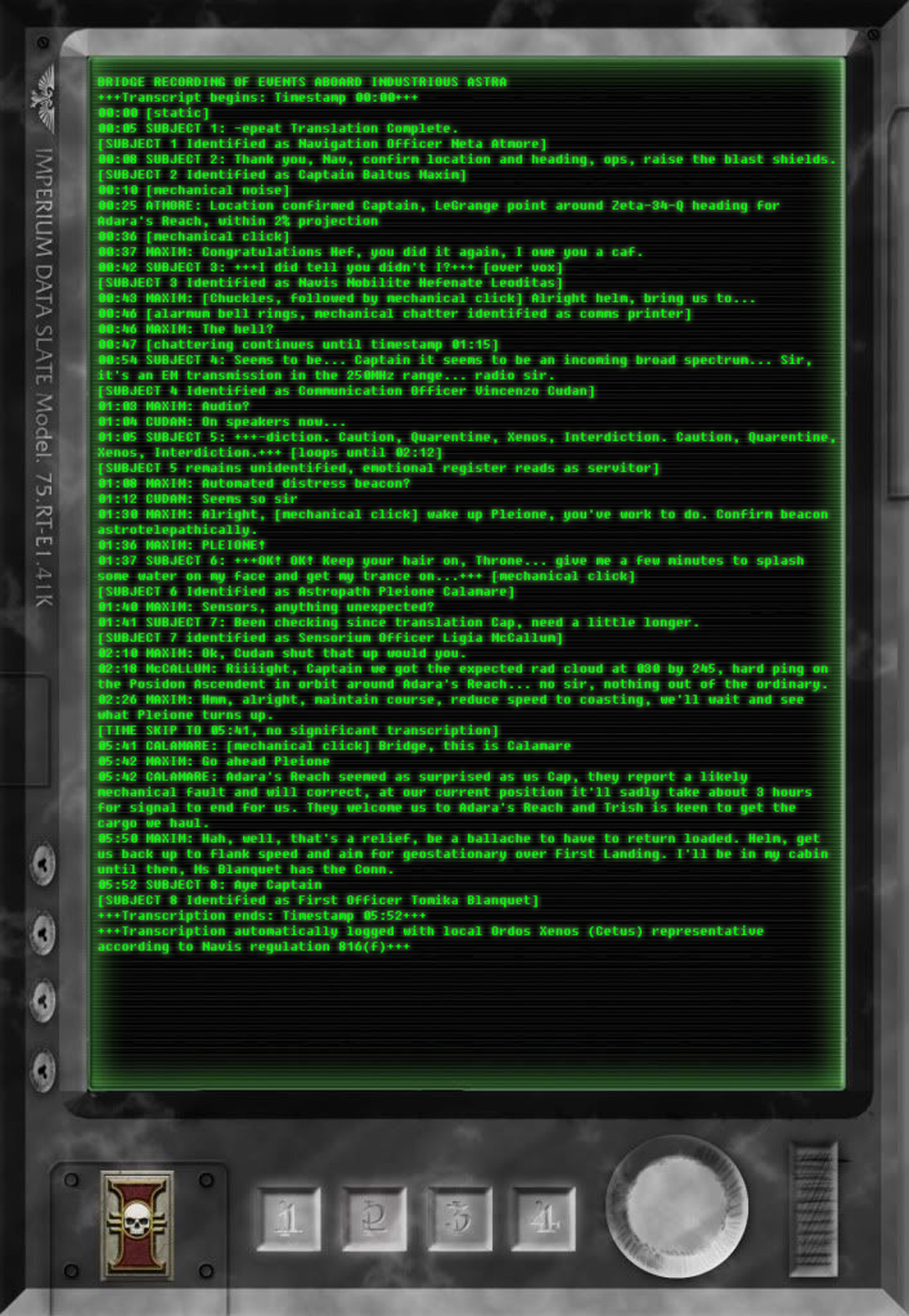 With many of his Agents already engaged, mainly with the fallout of A Local Problem for Local Tyranids, Michael gathered a scratch team of available Agents. Max Drent and Ekaterin Malo from his regular team, as well as borrowing Nadiya Zelenko and Atticus Kirriad from his fellow Inquisitors.

Initially they boarded the Industrious Astra to find out more about the crew’s experiences on Adara’s Reach, and check them for possible Xenos taint. They learned:

They also uncovered a trio of weapon smugglers, including Xenos weapons, and apprehended them. Following up leads on Xeno tech suppliers has been delegated to other Agents whilst Michael and his team head to Zeta-34-Q.

Captain Baltus Maxim of the Industrious Astra is also guilty of these crimes as it was his ship that transported the smuggled items. He and his crew are also guilty of other petty crimes. Michael offered leniency in return for Captain Maxim becoming an informant for the Inquisition, and potentially undertaking future tasks for them.

Nadiya needed to remain in Cetus Major however Inquisitor Drake volunteered Agent Mira Keleman to join the mission to Zeta-34-Q in order for her to gain further experience and broaden her repertoire.

Once they reached the planet they pretended to be a Rogue Trader ship which had suffered damage from Pirate raids. Atticus played the role of Rogue trader Zacarias Norton the Third, with the rest of the team playing his staff.

They visited the planet and started gathering intelligence, initially with conversations with the locals and a little light hacking, but culminating in the abduction of local arms dealer (and Xenos weapons trader) Drago Sivat.

The aliens, known as Vaina, were 18 foot tall psychic monstrosities, using mind control to stay hidden from sight and reading the citizen’s thoughts. They were also able to project psychic energy as an attack. In combination this had allowed them to take complete control of the planet after a brief failed insurrection and the taking of all the children as hostages.

The children had been moved to the Posiedon Ascendant, the colony ship that had brought the original colonists to the planet and was now parked in orbit theoretically as a defence platform. The team also discovered that the Vaina ship was parked in the empty space where the warp core had originally been.

Estimates from the size of the ship suggested between 12 and 18 Vaina were present. The team decided to launch a surprise attack on the ship to kill as many Vaina as they could and cripple their power base, as well as freeing the hostage children. With that done they hoped they would then be able to assault any Vaina remaining below, using remote viewing cameras to get around their psychic invisibility. Civilian casualties were likely but expected to be low and deemed unavoidable. Ahead of the mission Michael gave Max his powerful Conversion field, keeping for himself the weaker but MIU controlled Refractor field that Max had given him the previous Candlemas.

The insertion went well, Max’s superlative piloting bringing them in beside the Xenos craft unnoticed and allowing them to board the Xenos vessel via its connection to the Posiedon Ascendant. The door to the ship was opened via psychic contact with Mira. Once aboard it was discovered that the Vaina ship did not have internal gravity, and having got into position a deadly firefight erupted.

Max spent much of the mission carrying the blind and helpless Astropath, who had been brought along to provide psychic shielding, around as he engaged the foes. Michael ended up on the engine deck and was exposed to unknown energy. He came close to dying when an alien that had seemed to be dead attacked him with his psychic blast, the weaker Refractor field only just powerful enough to ever the blast when combined with his energy shield and heavy carapace armour.

Ekaterin was badly wounded, however she ignored her wounds and continued to fight until Atticus arrived and physically intercedeed his own energy shielded body between her and the enemy, at which point she relented and applied emergency first aid to stop the bleeding. Max, getting involved in the final charge on the bridge, was also hit by a potent psychic blast and without Michael’s Conversion shield would certainly have been killed.

As the ship had begun to move during the battle, and now that the pilots were dead was heading directly into a moon, Max braved the control pods that were located in vats of breathable fluid. Unfortunately without any psychic ability he struggled to control them and asked Mira for help. Strongly reluctant, Michael part-cajoled and part-ordered her into the tank, and Max accompanied her for moral support and guidance. Together Max and Mira managed to change the course and finally halt the ship.

With the majority of the Xenos eliminated and the ship halted, the rest of the operation was mop up.

Atticus says you put your HEAD in a vat of XENOS GOO so that you could BREATHE THE GOO and TELEPATHICALLY FLY THE SHIP.

I love you so much but you're a complete idiot: of COURSE Gregory won't let you go off and spend years on some planet somewhere. He needs you because you are the only one who would EVER do that. He needs YOU.

You're a fucking good agent, Maxie. So there.

PS Next time you come and ask me why he won't let you wander off I'll remind you about the fucking ALIEN GOO. Thank you for this gift of a reply.

Or did you mean grass? Need something to clean out that Xenos goo from your lungs? Can’t say I blame you.

Afraid I am not into that sort of thing. Maybe ask Mira? She looks like she knows how to have a good time. By the looks of it would enjoy your company for an evening.

Emperor throne, you deserve it after what you faced.

First off: Gregory?! Do you call him his whole first name in private? Not even Greg? Or (Terra forbid) Greggles?

And, contrary to your spy, I didn't fly the repugnant and definitely heretical* thing, I just plotted the course. Mira did the actual heavy lifting. I couldn't make it budge.

But maybe this is why Gregory doesn't want me on my own: maybe he thinks I'm an idiot too? Was that a stupid thing to do?

Miss you too. Don't die either x

That’s the thing about Michael - his personality repels nicknames. I blame the parents. Name your child Gregory, then raise him in such a way that ‘Greg’ doesn’t work at all.

(If you want the truth I actually prefer calling him Michael. It feels more like his name. But he did this whole “you can call me Gregory” thing. It’s how he signs his letters. What’s a girl to do?)

He wants you to stay because someone who’ll put his face into xenos goo for the good of a mission is 100000% the kind of person everyone wants on their team. You’re the holy grail. Giving you up would be like throwing away the best gun in your arsenal.

You’re just going to have to give up and accept it, mate: you’re good at your job.

You give the best pep talks. Thank-you.

If the inquisition gig doesn't work out you should consider commissar-dom. Or life coaching.