The Menagerie of Heroides Kedves 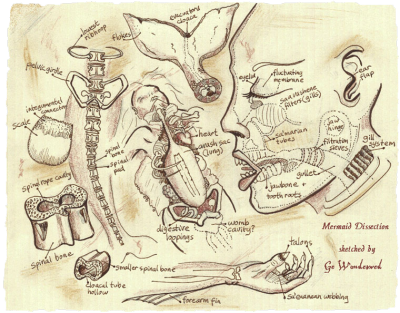 Inquisitor Drake led a team of agents to investigate an alleged demon sighting on Diaphone. Instead they found a twisted scientist modifying human victims to give them the properties of sea creatures.

In the wake of the Jawmunga Cult, Inquisitor Drake left instructions that the Magistratum be on the lookout for further cult activity and contact the Obelisk immediately.

+++TO: The Obelisk, Cetus Major
+++FROM: Proctor Sinctythe Thietmar, Diaphone
+++SUBJECT: Request for Aid
+++THOUGHT FOR THE DAY: No man that died in the Emperor's service died in vain

My Lords and Ladies of His Holy Inquisition,

I have the honour of being Sinctythe Thietmar, Proctor of the Magistratum. I am the senior Magistrate on Diaphone. I bear the shameful responsibility of reporting that we have been visited by a demon. I have dispatched Senior Investigator Kristina Forsberg to lock down the scene and acquire more information, but I beg you sent us more qualified assistance. Rumours are already spreading amongst the peasantry. I believe this falls within the remit of what we were instructed to watch for after the event surrounding the Basilica of the Order of the Cyan Storm and fear a resurgence in the related group of undesirables.

The report comes from the island spaceport of Cenk. If you see fit to send aid I would recommend starting there and contacting Senior Investigator Kristina Forsberg, however we will of course accommodate any other course of action you prefer.

Drake gathered a few extra agents from the Obelisk prior to departure for Diaphone. Ash would be useful in protecting against demons due to her nature as a pariah, Sister Airi for her local knowledge of Diaphone, Jaxx for his ability to engage a threat from a safe distance and a new agent Hannat Rekord whom Kovach had been asked by Inquisitor Kretschmar to "try out".

Upon arrival Senior Investigator Kristina Forsberg met them and showed then the dead body of the alleged demon. It was a woman with flat skin where her mouth should be, gills on her neck and whose legs were thick tentacles. As Hannat commented that he had dated worse, Forsberg lifted a tentacle to reveal a beak where a woman's genitalia would be.

Drake revealed that this was not a demon, which was a relief to Forsberg until she realised that his certainty meant that demons did exist and he had seen them.

Savant did an autopsy and discovered this was a work of extremely talented surgery. The human parts of the body were identified as Adept Beata Amir of the Administratum. She never returned from a fact finding mission to assess the lower levels of Cenk Hab Deep Gamma in order to estimate the costs to rebuild and re-populate this abandoned area.

Investigating the site where the body had been washed up. The corpse appeared to have died from its strange water lungs not being efficient enough. Sister Aria concluded that the prevailing weather patterns supported the idea that the body may have washed up from the direction of Cenk Hab Deep Gamma.

The island of Cenk has five underwater hab blocks extending down the side of the underwater mountain that formed the foundation of the island. Taking the form of massive skyscrapers that were built down instead of up, the lower levels were many hundreds of meters under water, highly reinforced against the water pressure and almost completely cut off from daylight.

Over the centuries of population variance, the lowest levels that had once been the least desirable habitation had become abandoned and run down, with many mechanical and electrical systems failing and some compartments leaking.

Into this damp rust depth, Drake led the team. Eventually they found a secret area that appeared to have been sealed off due to flooding but was in fact perfectly habitable.

Probing deeper the team were a bushed and attacked by various hybrid creatures. After a man with translucent skin and thin spiny teeth did not show up on Jaxx's bioscanner and resisted his the sedation from his needle pistol, Sister Aria took the lead with her power armour and boltgun.

Fighting through a man heavily armoured in crab-like carapace with claws as hands, and an armed and clothed man with silvery skin, they eventually found the entrance to a laboratory. Jaxx confirmed lifesigns of many people within.

Savant torched the room with a flamethrower, and Sister Aria and Ash cut down the beefy shark woman and man with a glowing lure emerging from his forehead that rushed out.

Hiding at the rear of the room was Magos Bologis Heroides Kedves, who threatened to flood the entire section if they did not leave. Drake talked the man around, persuading him that as an Inquisitor he, Drake, was interested in Kedves' work and willing to support and fund it.

In a rear chamber a huge glass tank contained a woman. She had a fish tail instead of legs, silvery skin, webbed fingers and sensory fronds for hair. Where most of the creatures they had encountered so far were hideous twisted monsters, Marina could be considered beautiful.

Drake spoke with Marina and discovered she had no memories from before the completion of the long procedure that had transformed her. Considering Kedves claimed her as his wife she also had no understanding of the concepts of marriage or love.

During this encounter the rest of the team had moved up and Jaxx disabled the bomb that could have flooded the chamber. They grabbed and sedated Kedves as he stepped out of the rear chamber.

Drake asked Sister Aria if he could use her bolt pistol to euthanise Marina, but she insisted she would do it herself. Marina did not even recognise a gun as it was pointed at her.

Further investigation of the barbs reveal them to be fragments of spines of an unknown creature, similar to those of a sea urchin. A feint psy-trace was detected in the spines but it faded rapidly. Spines are now inert.

Drake's arranged for the team to be screened for psy-taint/exposure.

Mendoza worked with Valdarius to learn what they could about Kedves' surgical techniques. Specifically investigate with regard to reconstructive surgery for valuable assets.

Further interrogation regarding the organisms he encountered in the ocean, as the spines suggest a psy-active fauna or mutant. Teams in hazmat suits examined sub-stack for further evidence of spines or other non-human organisms, although it is likely the creature will have been encountered underwater rather than indoors.

Drake told Kedves he was pardoned due to being influenced by the spines and informed him that he would be released pending final screening in a few days. Then, overnight, an odorless gas was pumped into his cell while he was sleeping to euthanise him painlessly, as clearly he was too dangerous to free.

Informed Diaphone authorities that threat has been neutralised, thank them for their diligence.

If and when any actionable intelligence is gleaned WRT the organism that produced the spines, take a psi-scanner in a submersible.

During the medical screening Sister du Puy discovered Drake had deep scarring underneath a skin graft in the shape of a heretical sigil. Seeing her reaction he explained it's origin (a deep cover mission when working for the Odro Malleus) and persuaded her it was no cause for concern.