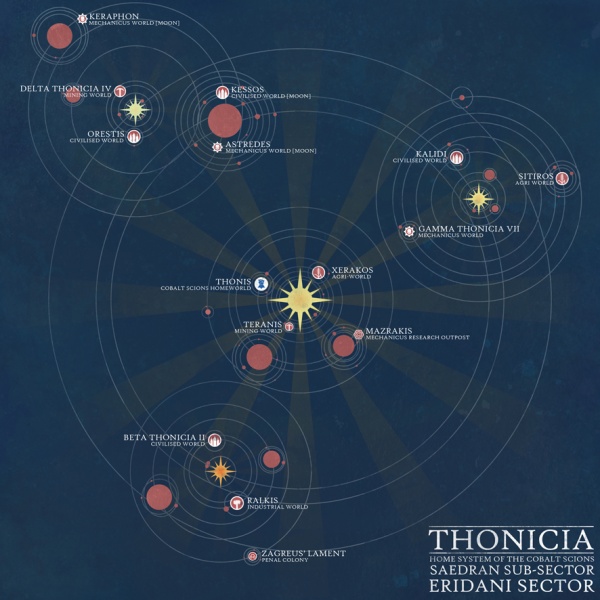 Situated in the Saedran Sub-sector of the Eridani Sector, Thonis is the home system of the Cobalt Scions Chapter of the Adeptus Astartes. It is the name given to both the system as a whole, and its primary planet. The system has four suns and numerous inhabited worlds, all of which are collectively referred to as Thonicia, and its inhabitants as Thonicians.

While Thonicia contains multiple worlds with their own governments, they have long since stopped operating with any real autonomy. Instead, representatives travel to Heracleion, the system's capital city. Following the arrival of the Cobalt Scions, Chapter Master Tiberius Drusus has reformed the government and assumed control, giving himself and all future Chapter Masters the political rank of Dictator. The last Thonician Governor, Lord Aderbal, was given a new title: Locutor of the Senate. Representatives from Thonicia's 49 most prominent noble families would also be allowed to nominate a Senator to represent their interests. Controversially, Drusus also announced that ten commoners - called Tribunes - would be responsible for informing the Senate and the Dictator how their legislation was being received by the wider Thonician population. More importantly, if the Tribunes were unanimous, they could veto new legislation proposed by Senators. This veto could only be overruled by the Dictator or, in his absence, by one of the Cobalt Scions' lieutenants, all of whom hold the title of Praetor.

This total upending of a millennia-old regime was met with opprobrium by the Thonician nobility, but they soon realised they all wanted to have a seat at the Senate. The inevitable infighting broke their unity, and ensured they were marching to the beat of Drusus' drum.

For more detail on the context of these reforms, and the events preceding them, see the appropriate section on the Cobalt Scions history.

This mining world is rich in various ores and minerals. Even after millennia of excavation, there are still plenty of untapped seams waiting to be dug out, refined, and exported to Ralkis, Keraphon, Gamma Thonicia, or indeed outside the system. A common extra-Thonician destination is the shipyards of Saedra VII. Working conditions are poor, and life expectancy short. There was a brief uprising in 582.M41, but this was swiftly crushed, and operations restored. The poor conditions have recently returned to the political landscape following Drusus' formation of the Thonician Senate, and the newfound ability of the Tribunes to bring attention to the issues of the system's workers. It remains to be seen what if anything Drusus will do in response.

The once-fertile soil of Xerakos has now been industrially farmed for so long that its quality is now waning, despite regular imports of fertilizer. This in turn has created a degree of uncertainty and fear as regards the future of this agri-world, but experts' warnings that the only way to recover is to allow the fields to go fallow for a time have been dismissed as impractical. Other experts have suggested that the food growing potential of other worlds in the system is significant, and that in theory the system doesn't need Xerakos' output to feed itself. This suggestion has drawn the ire of Xerakian farmers naturally hesitant about being made surplus to requirements, and who don't seem to understand that the Imperium will always have a demand for more food elsewhere. 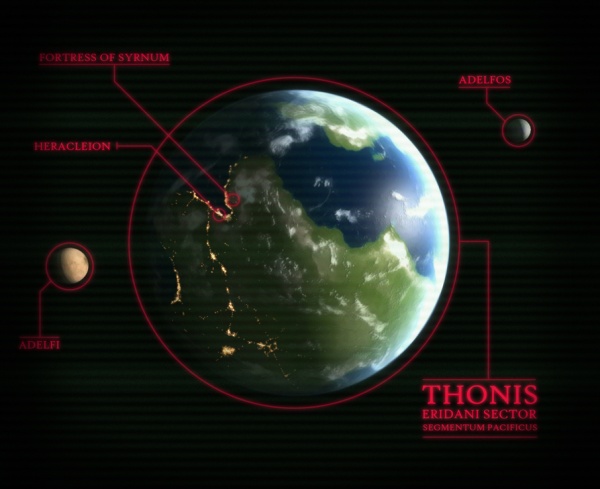 Thonis Prime is a self-sufficient planet sporting a mixture of agriculture, manufacturing, and other industries. Its climate is highly favourable to human life, albeit slightly too warm for visitors. The polar tundra regions are largely uninhabited, while extensive seawater desalination plants and soil culturing have been used to turn arid areas into productive agricultural regions.

This moon-based Mechanicus research station studies the unusual biome of the gas giant it orbits. There are no signs of sentient life, but other flora and fauna can be found to a degree of complexity that is highly unusual for such an environment. Mazrakis' Magi Biologis work under the continuous threat of being closed down or repurposed to work on something more economically beneficial, but have so far seem to have friends in high places with Keraphon's leadership (see Delta Thonicia, below).

These two airless rocky bodies hurtle around their star as a rotating pair in a close orbit of each other. They are entirely uninhabited, but there is an urban legend that the most talented spacefarers can prove their skill by successfully plotting and executing a landing on one of these bodies, through the intense solar activity, bracing orbital velocities, and gravitational challenge.

Kalidi is a world of deserts and oceans, with cool alpine rainforests at the poles. Most of the life on the planet is aquatic. Fishing and kelp farming form half the major exports, the other half being the extraction of Kalidi's substantial prometheum deposits. Whilst in theory this should make Kalidi the wealthiest planet in Thonicia per capita, the centralised nature of the Thonician government means that much of the profits find their way to noble bank accounts rather than workers' quality of life, and this has led to some seagoing vessels quietly becoming floating micro-nations that rarely make landfall to contribute to the wider economy beyond selling part of their catch to pay for boat maintenance.

Lacking a breathable atmosphere but comfortable gravity made GT-7 an ideal place for emissions-heavy manufacturing, and the Mechanicus wasted no time in claiming it as their own. Now a smog-choked hellscape, GT-7 imports ore from Teranis and fuel from Kalidi to feed vast automated manufactories. These produce everything from cogitators to vehicles, and even some of the components used in the Keraphon shipyards.

Sitiros is regarded by some as a damning indictment of the lords of Xerakos. Despite Sitiros' colder climate and punishing winters, its crop yield is comparable. The difference is that it has been managed better; its governors have, over the years, decided to produce less but to manage the biosphere's integrity more cautiously, meaning that its output has remained impressively consistent over the centuries. At times, demands have been made to increase production in the short term, but Sitirans are famed both for their long view of things, and their disinclination to suffer fools.

This hot, humid mining world has been plagued with industrial action for over sixty years. The metals and minerals beneath the jungle soil are bounteous, but active tectonics and monsoon-induced shaft floods make the work extraordinarily dangerous. It has been suggested that servitors be used to take over the work, but the miners see this as an attack on their way of life and culture, as it's unclear how they would be employed were the workforce to be automated. Attempts at partially automating the digs often result in the servitor units being sabotaged, and many mining corporations find it easier to just keep on paying the locals to do what they have done for as long as anyone can remember.

Kessos is one of Thonicia's most populous worlds. It orbits Delta Thonicia VII, a turquoise gas giant that dominates the skies. On the cool end of temperate, and thickly forested, much of the food needed to feed the world is imported from elsewhere in Thonicia. The planet's primary export is not physical, but intellectual. The historic records state that some time in M35, research noted a sharp increase in productivity when workers performing routine administrative tasks were given ready access to natural environments and were kept in good health. Kessos, then, is an experiment that was rarely if ever replicated: what if an Administratum hub were spread over an entire planet, rather than jammed into one hive, and a datanet used to connect all the disparate nodes? The result is a population who associate physical fitness and an enjoyment of outdoor pursuits with industriousness, and productivity increased by 29% within fifty years. While initially this seemed effective, further research demonstrated that the workforce were so keen to ensure that it was a success that they began to hide any issues they were having, and noted that the more healthy a person was, the more they would be seen as disciplined. This resulted in people working even harder at their appearance than their actual work, and getting promoted based on these superficial merits. Eventually, the planet was full of people trying to do anything to convince everyone else that they were fine, while secretly being paranoid that they weren't beautiful or fit enough to progress in their careers, not to mention the emergent prejudice against age and infirmity that came with the cultural shift. Kessos is, in several senses of the phrase, a superficial paradise.

The high standards of education needed for an Administratum planet have, however, created renowned centres of learning for those with the money and connections to climb the career ladder. Students learn various dialectic modes, analytical methods, and mathematical proofs all designed to create incisive thinkers. This has in turn resulted in Kessos becoming renowned for having particularly influential leaders, able to twist more impressionable politicians around to their way of thinking.

This world-sized moon has been a long-term terraforming project instigated by the Mechanicus in late M34, and only in the last few centuries has it begun to approach being comfortably habitable. Currently there are only a few small settlements present, used to house and support the various Mechanicus magi who maintain the project. Given the relative lack of security or oversight - the planet is of limited strategic value - its deep canyons are sometimes used as a good place for pirates and other ne'er-do-wells to hide. Regular system fleet patrols haven't managed to stamp this practice out entirely.

Another world-sized moon orbiting a mustard yellow gas giant, Keraphon is the Mechanicus' biggest settlement in Thonicia, and one of the largest shipyards in the Eridani Sector. Most of the industry on the surface is used to manufacture ship components. These components are then taken up into orbit and brought to the rows of skeletal adamantium chassis. For the most part, Keraphon produces escort vessels and civilian ships, but there is one berth used for the production of capital-class vessels. Most heavy duty shipbuilding of that sort, however, is undertaken in the much larger docks of the Saedra system.

The construction of any starship is still a significant strategic asset, however, and the Mechanicus ensure Keraphon is well defended, boasting many Skitarii cohorts, extensive orbital facilities, and a household of Knights.

The newly arrived Cobalt Scions have already started making overtures as to how quickly the production facilities could be expanded so as to begin the work of constructing warships for the Chapter.