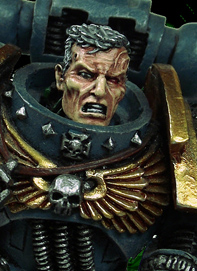 Elias is an exiled brother-sergeant of the Order of the Templars Errant, and has now spent upwards of forty years in the service of the Inquisition. Most recently, he has been assisting Inquisitor Drake of the Ordo Hereticus. Whilst other Templars Errant remember him as an outspoken and vociferous sergeant who knew when to question his captain's orders and when to obey without hesitation, the crew of the Trojan know him as a withdrawn man of few words and fewer jokes.

During the Iriax Insurrection, the citizens of the Templars Viridian homeworld rose up against their overly-strict masters and – with the help of some Black Legionnaires only too keen to assist – kicked the Templars off their own homeworld. It was one of the most humiliating defeats in the Imperium’s history, and left the chapter at barely a third of its original strength. During the retreat from Iriax, Brother-Sergeant Elias of the 2nd company was accosted by a marine of the 1st, who told him that the Chapter Banner had just been taken by the enemy not half a kilometre away, and that an immediate assault might reclaim it.

Having to choose between saving the lives of his men or launching a suicidal assault into the midst of the enemy, Elias chose the former. The Chapter’s survival, he said, counted for more than the Chapter’s honour.

After the evacuation, Elias was summoned to Chapter Master Gaius Octavian’s hall on the chapter’s flagship and told, in no uncertain terms, that he could either go and retrieve the banner, or face exile. Elias tried to reassert his reasoning, of the importance of preserving what little geneseed was left, but Octavian – a famously proud and recently humiliated man – would have none of it. Elias, disgusted by Octavian’s arrogance, chose Exile.

Elias continued to do the Emperor’s work alone, coming to the rescue of isolated Guard garrisons, helping Arbites to crush gangland insurrections, and so on. It wasn’t long before his movements were being monitored by the Inquisition, and eventually, he was headhunted by Inquisitor Aerdon as a potential ally.

He was eventually invited back to the renamed, penitent and fleet-based Templars Errant by a Chapter Master who had since seen the error of his ways, but Elias had no interest in rejoining his brothers, fearing that his return might re-open old wounds the chapter needs to forget.

When Inquisitor Aerdon finally died, Elias continued to work with one of his proteges, Inquisitor Drake. Their work took them all the way from the Eastern Fringe to the Achernar Sector, but over time Elias found that Drake's approach - subtler and stealthier than Aerdon's - left him with few opportunities to get involved. Whilst the time he spent with Drake broadened his mind (perhaps more than is safe for an astartes) he eventually decided it would be best to return to something he had known over a century before: the Deathwatch.

Among his brother-marines in the Deathwatch, Elias is sometimes jokingly referred to as "the tealshield," in that he is a blackshield in all but name, refusing to discuss his past lest it provoke disagreement. After spending so much time among the inquiring minds of the Inquisition, Elias finds the company of hypno-indoctrinated astartes wearying. He keeps this to himself. From their perspective he is curt, and has little patience for any traditions he views as a waste of time or that revere the Emperor as a god. That said, he encourages the marines in his team to challenge his orders when they can see a better way forward, and does everything he can to safeguard them in particular, and Imperial citizens in general.

When serving aboard the Trojan

Having now lived and worked aboard the Trojan for some years, Elias has taken it upon himself to train the ship's Stohlbard Dragoons to a higher standard of close-quarters combat than is normal for Imperial Guard units. Whilst Lieutenant Commander Petersen retains overall command of the 14th Company, most of the Dragoons look up to Elias as a mentor.

During Aerdon's tenure, Elias' active combat duties were restricted to missions involving the Inquisitor's personal warband. Inquisitor Drake, conversely, encouraged Elias to lead a full squad of Dragoons in combat. Whilst this led to a few slip-ups in the first few engagements (whereupon Elias fell back into his training and commanded the men as though they were Astartes) he has since learnt how to lead a squad of human soldiers in combat.

When exiled, Elias was permitted to take a suit of Mk7 Power Armour, which he maintained with the help of Drake's techpriests. They also helped fit his Godwyn-pattern boltgun with a shot selector in a similar manner to the Hesh-pattern bolters of the Deathwatch, a Mk9 Astartes-pattern chainsword, and an assortment of grenades. Sourcing bolter ammunition was his biggest problem prior to his service in the Inquisition.

Now that he's rejoined the Deathwatch, things are different. In theory he could take anything into battle, but a predisposition for maintaining tactical flexibility means that he usually takes a power sword and a combi-bolter of some sort. Some of the brothers of the Watch expressed surprise that he didn't seem to have a sentimental attachment to the wargear that had served him dutifully prior to his arrival, but Elias considered them to be nothing more than tools, and he now has access to better tools. Should he choose to leave the Watch, he will take them up again.

After Drake had spent some time in the Achernar sector, it became apparent that he was engaged with a lot more infiltration and subterfuge than open combat, and after discussing Elias' redundancy in such matters, they parted ways amicably, with Elias leaving for Hydraphur to join the Deathwatch Killteams once more.