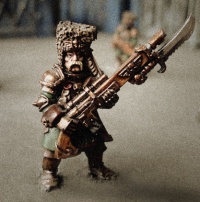 A member of the Stohlbard Dragoons

The Stohlbard Dragoons are an elite regiment of mechanised heavy infantry from Jormunholm in the Ultima Segmentum. Like all regiments from their homeworld, they are known for their psychological resilience.

Jormunholm (pronounced yor-mun-holm) is a world on the cold side of temperate. The Jormungandr Forest stretches in an unbroken belt around the equator, flanked on each side by impenetrable frozen wildernesses extending out from the poles. There are no real seas on Jormunholm, although numerous meltwater rivers form at the warm end of the glaciers, running down into thousands of mineral-rich lakes.

Jormunholm was colonised in the 37th millennium. The presence of so many rivers and lakes prevented more than a handful of cities from developing, and Jormun culture came to revolve around small, semi-autonomous townships instead. The quality of life and society in each of these townships can vary wildly, but some rules have always remained sacrosanct: a stranger is always welcome, and trade is always encouraged; a town with no allies is considered weak, since none will come to its aid in the event of a disaster.

In 732.M38, the space around Jormunholm was enveloped in a warp storm. The effects on the planet's fauna were subtle at first; the forest predators became more cunning, and the beasts in the frozen wilds grew larger. In time, though, strange figures were said to stalk the forest at night. Many towns went silent, their inhabitants taken or fled in the night. Panic began to spread across the planet. It soon became apparent that strange, otherworldly beasts were appearing all over the planet, leaving carnage in their wake. The numbers of the enemy fluctuated at the whims of the warp storm, and their movements were impossible to predict - they could attack anywhere at any time.

Mounting a centralised defence proved useless, and four months into what the Jormun people were now calling the 'Kvalmende', a new strategy was formed. Jormunholm's troops spread out, occupying every township in small numbers. Every unit, where possible, was mechanised, ready to respond to any call for aid from nearby towns. That way, when one settlement was attacked, it simply had to hold its walls long enough for every town in the area to send reinforcements. The Jormun came to see their world as one vast web of interconnected towns all propping each other up. As had ever been the case, a stranger was always welcome - he usually brought a gun with which to shoot the daemons at the door.

When the warp storm finally abated in 733.M38, and the Kvalmende ended, it was not long before the Imperial Inquisition turned its eye on Jormunholm. In the great scheme of things, the warp storm had not been a particularly violent one; the planet was still in the right space and time, the lakes hadn't turned to blood, and it hadn't been overrun with daemonic filth. There were certainly signs of warp-taint; some of the altered fauna passed their unnatural traits on to their young, and psykers on the planet often allude to the veil separating the warp and realspace as being particularly thin. Despite all that, though, the Jormun people appeared to have weathered the Kvalmende with remarkable fortitude, and after some debate, the planet was spared Exterminatus. To this day, however, trade to and from the planet is strictly monitored by the Inquisition, as are the very few visitors allowed down to the planet's surface.

In the Kvalmende's wake, Jormunholm's townships are now considerably more fortified, and the doctrine of a swift, mechanised response has become enshrined in tradition. There is no real concern about the tall tales told by Jormunholmers of the mythical beasts fought by their ancestors during the Kvalmende; most listeners assume them to be exaggerations or local superstition rather than actual history; as a result, Jormun soldiers are often seen as rather odd or eccentric by other Imperial Guardsmen.

Stohlbard is one of Jormunholm's few cities, and home to multiple regiments of the planet's defence force.

The Stohlbard Dragoons are one of Jormunholm's most elite regiments. Like all Jormunholm soldiers, Dragoons receive intensive training in melee combat - something of an inevitability when fighting in such dense terrain. As an elite regiment, Dragoons also wear heavy carapace armour to reflect their role as shock troops.

Lt. Commander Petersen commands the regiment's 14th company on permanent attachment to the Trojan. It is a matter of great pride to the regiment that some among their number are in the permanent service of the Imperial Inquisition, since most Guardsmen would be incapable of surviving the psychological damage incurred by witnessing warp-spawn without a mind-wipe immediately afterwards. Membership of the 14th is considered both a curse and a privilege; whilst most men recruited into the Imperial Guard can expect never to see their home again, things are different for the 14th. On the one hand, the men living on board the Trojan can expect to face some truly appalling foes capable of driving even a Jormun's resilient mind to madness. On the other hand, they are well paid, well looked after, and - at least while Inquisitor Aerdon was alive - the Trojan always returned to Jormunholm at least every three years. Inquisitor Drake does his best to uphold this tradition, but with his work having taken him to the Segmentum Tempestus, the custom's practicality is coming into question.