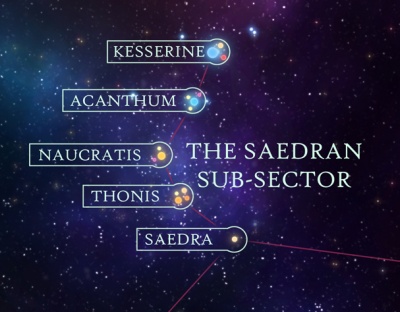 The Saedran Sub-sector is situated in the Eridani Sector. Its spinward edge borders on a broad expanse of space entirely uninhabited by the Imperium, and from which frequent orkoid raids emerge. Its trailing edge borders on one end of the Pheraean Rift, meaning that the warp route through the Saedra system is strategically vital for reaching the rimward regions such as the Graiae and, further still, the entire Achernar Sector. The subsector's inhabited systems are also noted for their many suns; of the five inhabited systems, all but one of them have at least three suns. This in turn means there are an unusual number of inhabited worlds in a small space, and to an extent, the Saedran subsector is almost a sector in its own right.