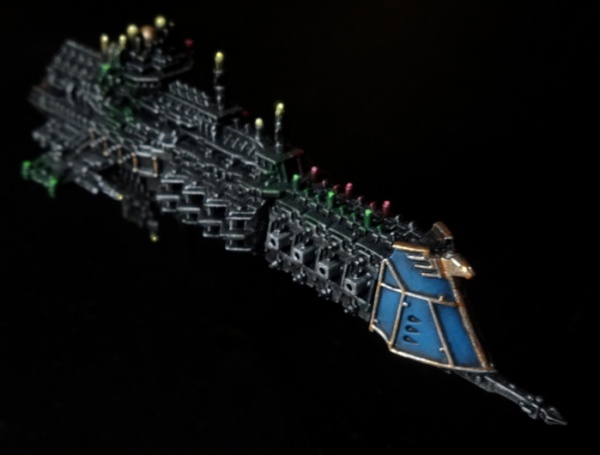 The Intemperance was commissioned in 572.M37, and is one of Battlefleet Achernar's oldest vessels. Like many dictator-class cruisers, it was originally a lunar class ship of the line, but had its lance batteries replaced with flight decks in 943.M40 after Battlefleet Achernar lost two of its carriers in the same year. The refit was done in something of a rush, resulting in occasional power fluctuations on the port flight deck, but generally this manifests as slightly inconsistent lighting levels rather than anything more serious. The deck crew brush the issue aside as just one of the ship's ‘quirks.' Where many old ships feature wood or stone furnishings on the bridge and on the officers' decks, the Intemperance is rather less flamboyant, instead featuring riveted metal archways and cast iron embellishments. Some find the amber pools of light on the bridge rather gloomy, whilst others describe it as having a certain warmth.

The Intemperance has a total crew compliment of approximately 8,500.

The Intemperance can carry a total compliment of 60 torpedoes, allowing for ten full salvos, although they are generally deployed more conservatively. Each of the six tubes is manned by a crew of 30 and commanded by a 2nd Lieutenant, who in turn reports to the Lieutenant in charge of all six tubes.

The gun decks fire in support of the macro cannon batteries, although they lack the macro cannons' effectiveness at range due to less impressive sighting equipment. 1,200 of the Intemperance's crew live and work around these guns and the associated barracks and mess halls.

The Intemperance sports eight macro-cannons. These are the ship's heaviest armament, and each requires a crew of 130 to operate and maintain. Each gun is commanded by a 2nd Lieutenant, reporting to the Lieutenant commanding the battery, and each has a nickname. The port side guns are known as Old Faithful (the only gun that has never been replaced), Roaring Rogal, Dead Man's Bluff, and Acceptable Collateral. The starboard guns are called Ear Splitter, Tough Lover, Yesterday's Meat, and Sincere Apologies.

The ship's most strategically vital attribute is its fleet of attack craft. The ship is a permanent home to 24 attack craft - usually an even mix of bombers and interceptors - as well as the captain's personal shuttle. There are also three auxiliary berths which allow the Intemperance to transport an additional squadron of craft or to transport other small vessels or the shuttles of Imperial dignitaries. These decks are home to the 600 personnel who fly, maintain and co-ordinate the carrier's most important assets.

The ship's quad-linked autocannon turrets are used to fend off incoming ordnance. There are 47 turrets on the ship's hull, each with a crew of four: a gunner, a loader, a comms officer linked to the command deck, and an auspex officer responsible for providing the the gunner with targeting information.

There are four manufactorums running down the ship's spine, overseen by the techpriests. They are used to build ammunition and ordnance as well as replacement ship parts. Compared to proper docks they are small, and have little room for the storage of materials, meaning that they can only really swing into sustained action when they have access to a supply of raw materials. They are designed primarily as a stopgap measure in the event that the ship has to operate away from port for a sustained period of time; in such situations the ship's bombers can be re-tasked to transport materials from a planet's surface up to the ship. The manufactorums are crewed mainly by techpriests, Mechanicum serfs and servitors numbering 450 souls in all.

There are two recreation promenades on the ship populated largely by non-military personnel running shops in which ratings can spend their scant wages. Music, gambling, 'massage' parlours and various other entertainments are offered and largely ignored by the officer classes. The threat of having a promenade pass revoked is enough to keep most crewmen in line. Indeed, it is shocking to BFA crew that other battlefleets do not necessarily have such facilities on their ships.

Medicae personnel are a crucial, if lamentably small, component of the crew. Viktor da Roya is the Intemperance's Chief Medicae, and manages 10 sick bays, 15 triage suites, and 7 operating theatres, most of them situated near the ship's core between the manufactorums and promenades.

Keeping the crew fed requires a huge catering staff. There are at least 50 cooks, with 300 additional galley staff. There are 40 galleys on board, one of which exists purely to serve the captain, and another responsible for the command staff.

The command and control crew operate on the deck immediately below the bridge, and co-ordinate the ship's functions and navigation. In all there are 60 junior officers and 110 mono-task servitors. As per Navy regulations, no-one below the rank of ensign is allowed on the command deck.

The Mechanicum crew bunk in separate barracks to the navy personnel, although fraternisation between low-ranking members of both institutions is commonplace, much to the disapproval of the senior techpriests. Mechanicus staff comprise a substantial proportion of the ship's crew, with a compliment of around 2,000.

Priests are a common sight on warships. Sailors are a superstitious lot, and having a priest extolling the Emperor's Grace within earshot of a hard-working gun crew maintains morale. The Ecclesiarchy contingent of the ship is big enough to crew a frigate, with about 180 priests all serving under Confessor Gallo.

Given the frequent need to board pirate stations and vessels, Battlefleet Achernar ships are expected to maintain a full contingent of 1,000 armsmen. This also safeguards the vessel against piracy after the Quorilian Incident in 387.M41, in which the Axiom, a ship of the line, was hijacked by a fleet of pirate frigates and destroyers.

After its conversion to a carrier in 943.M40 the Intemperance has been used primarily to patrol the Achernar Sector to combat piracy. In recent years, under the captaincy of Drusus Tormand, her crew had become renowned for their reliability and experience, although they had not been tested by an enemy capable of threatening them in some time. In the latter years of his command, Captain Tormand made the ship safer still by taking bribes from the very pirates and smugglers he was charged with policing. When caught, he swore under interrogation that none of the command staff had colluded with him, despite rumours that his executive officer Gereon Priscus was, at a minimum, aware of his dealings.

Following Tormand's arrest, Commander Priscus assumed temporary command. Despite his experience Admiral Tryphosa refrained from promoting him to the captaincy, and despite this snub, Priscus continued to run the ship and continue its patrols for thirteen months while the case against Tormand was built. The day after the announcement of Tormand's guilt, and the proclamation of the death sentence, Priscus was informed that he would remain in post as XO while a disgraced outsider from the Gothic Sector would be taking the captain's chair: Laius Ortano.

Ortano's first assignment was to investigate the Xephone system in the Scyrian Expanse. The Intemperance led a flotilla comprising the San Celestine, with escort squadrons 17 and 23. They discovered an ork armada besieging the planet, and rather than fleeing back to Kaprun proceeded to engage upon a campaign of hit-and-run skirmishes with the xenos fleet. Ortano also formed a temporary pact with an eldar leader, Onduin, whose colony in the Expanse had been similarly devastated by the orks. The allied fleet made a final push on the remnants in orbit over Xephone Prime, and only a single enemy capital ship escaped the ensuing battle. Several weeks after the naval victory, Imperial Guard forces arrived to reinforce the beleaguered ground forces. Ortano was decorated for his conduct, and Priscus grudgingly accepted that his new captain seemed to bring luck.

Such a substantial attack by the orks suggested an infestation nearby, and Ortano was tasked with exploring the Scyrian Expanse to discover their point of origin.