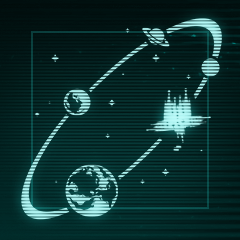 The Erydimae Incursion was a mission undertaken by Inquisitor Drake and others, involving the interception of an illicit trade between Hrud stowaways and an apparent agent of the seemingly Radical Inquisitor Leasah Gelineau. The Hrud were offering a small aquila pendant of unknown metal in exchange for what turned out to be a frozen head of a Navigator.

During the time when Inquisitor Michael was setting up his initial intelligence network in the Halo Zone, the Obelisk received a coded message to one of it's dead drops. The origin was unclear, but it was transmitted from somewhere in the Halo Zone. In a standard cypher, but not transmitted securely from an Imperial source so there was no guarantees of security.

This was received by Gaius Umberto and delivered to Inquisitor Drake.

Drake formed a team of available agents to investigate. The date was clear. The Ship was theorised to share the initials "AL" with Ashar Lear, who had lost an arm and a leg during the course of her duties (replaced be bionics), and whom Inquisitor Michael (the presumed sender) was familiar. The planet was Erydimae, the location of the final mission Michael undertook as an interrogator before being promoted to Inquisitor. The Object was less clear, the 3rd door on the left of the 5th floor was the chapel, and the wall had a large aquila upon it, but no amount of searching uncovered any object Michael might have left behind.

All leads exhausted the team headed to Erydimae to try and find this ship and intercept the sale. Marech Cadiz uncovered and infiltrated a local xenos artefact smuggling ring, whilst Max and Ashar headed to investigate the ship Astra Lux that was heading in to port. Investigation of the smuggling ring paid off, and Drake uncovered the name Gallus Hassig as a new buyer in town. Cadiz quickly located security footage of him and the team had a mugshot for their potential buyer.

Max and Ashar found Gallus Hassig on his way to the Astra Lux and followed him to a maintenance port below the main cargo level, where they observed him trading a frost covered cylinder for a small item on a string with some figures in unnatural shadow. They intercepted Hassig as he left, and turned him over to Drake who had caught up, and Max, Ashar and Cadiz followed the shadowy figures back onto the Astra Lux.

Drake quickly ascertained that Gallus Hassig claimed to be working for an Inquisitor Leasah Gelineau, and had the credentials to prove it, however it also quickly became apparent that the man had been subjected to rapid hypno-indoctrination and knew very little. Upon Drake's proof that he was an Inquisitor as well, and assurance that he was working to assist Inquisitor Gelineau, Hassig became compliant and he offered Drake the object he had recovered. It was a small aquila pendant of a strange oily looking metal, with disturbingly organic lines to it. Hassig insisted it should not be allowed to touch skin.

Max, Ashar and Cadiz chased the shadowy figures into the ship and engaged in a deadly firefight. It soon became apparent that these figures were xenos, wielding unknown plasma weaponry and possessing strange abilities to wrap themselves in shadow, however the effect was neutralised when Asher, a psychic null, got close to them. They killed two of them, learning also that the creatures decomposed with alarming speed, bu the third escaped deep into the ship.

To catch the final xenos Drake revealed himself to Captian Ramonita Nelia, ordered her crew off the ship and searched it end to end with his Stohlbard Dragoons. The final xenos was cornered and killed, although one soldier who got close to it was later found to have suffered a slight amount of unnaturally rapid ageing. The frozen cylinder was recovered, and revealed to be a cryogenically frozen severed head of a Navigator. Drake removed all trace of the alien's remains and recovered their strange plasma weapons.